130 Children Charged With Murder, Others, Released In Kano 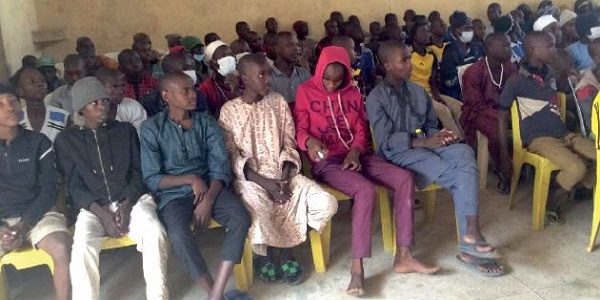 The Rotary Club of Bompai, Kano, has facilitated the release of 130 children charged with murder, rape, armed robbery and other major offences from the state’s Remand Home in Goron Dutse, Kano State.

The Rotary Club, in collaboration with the Kano State Ministry of Women Affairs and Social Development and the Young Evolving and Smart Concepts YES, swung into action for their training and release three months ago.

The Nation reported that the kids were being lectured on the dangers of drug abuse, where the outstanding ones and their teachers were given awards.

Sagab Sani Ahmed, Rotary Club of Bompai and District Governor Nominee (DGN), said, “We have launched a campaign against drug abuse and we are training juvenile offenders in various skills in order to change their bad ways to good,”

Speaking, the President-elect of Rotary Club Bompai, Miriam Obi, noted that the event was the closing ceremony of the Club’s Annual Interventions for Juvenile Delinquents at the Kano State Remand Home.

She explained that the Club influenced the training and release of 15 juvenile delinquents on December 1, 2021; 45 as of December 12, 2021 and 50 who would be rescued before the end of the closing ceremony on February 24, 2022.

Obi stressed that the campaign is aimed at addressing some identified issues that often lead to drug abuse through advocacy, sensitisation on dangers of drug abuse, and rehabilitation of abusers to help the young ones get a better future.