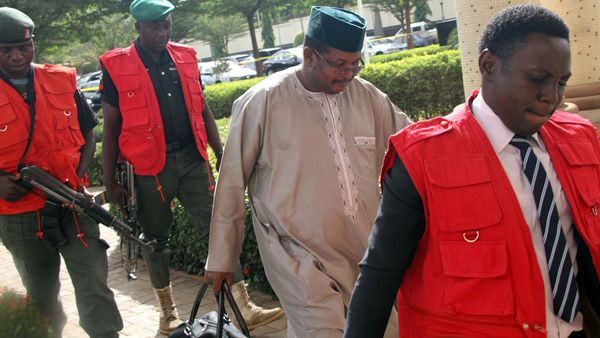 The Economic and Financial Crimes Commission, EFCC, has stated that it will appeal today’s ruling of the Federal High Court, Abuja, quashing the money laundering charges preferred by the Commission against Mr. Andrew Yakubu, the former Group Managing Director of the Nigerian National Petroleum Corporation, NNPC.

WikkiTimes learned that Yakubu was arraigned by the Commission in March 2017 following the discovery of $9.8million stashed in his property located in the Sabon Tasha Suburb of Kaduna.

He had pleaded not guilty upon arraignment claiming that the money found was gifts he received from his friends.

In the course of the trial, the Commission called witnesses and tendered documents in evidence, but the defendant filed a no-case submission and the court based on that struck out two of the six counts.

Two further counts were chalked off upon appeal by the defendant while the appellate court ordered his continued trial on the remaining two counts.

Delivering judgment today, Justice Ahmed Mohammed held that the prosecution failed to prove the ingredient of the offence beyond a reasonable doubt, ruling that the Commission ought to have investigated the defendant’s claims that the monetary gifts he claimed to have received came from his friends, and tender the recovered cash before the court. he consequently discharged and acquitted Mr. Andrew Yakubu.

However, the Commission believes the trial judge erred in dismissing the charge and has resolved to test the ruling at the appellate court.

Previous article2023: You Must Not Allow Repeat Of 2019 – Lai Charges NBC
Next articlePolice Nab 3 With Fresh Human Head In Gombe