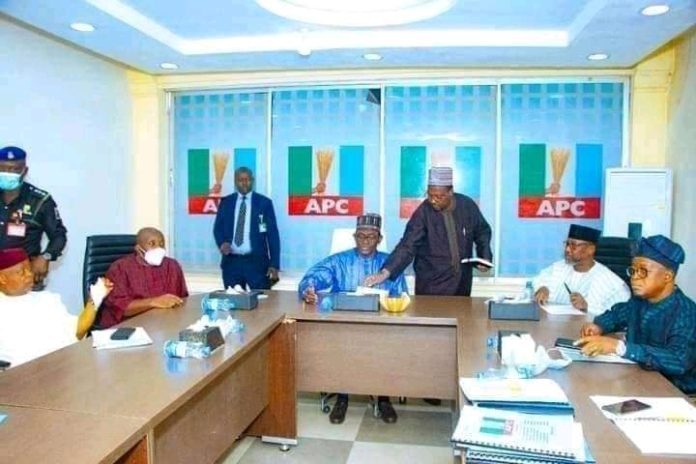 The Chairman of All Progressive Congress, APC, Caretaker Extraordinary Convention Planning Committee, CECPC, and Governor Mai Mala Buni of Yobe State, yesterday said the problems in the party were surmountable and did not constitute threat to the party.

In a statement by his Director, Press and Media Affairs, Mohammed Mamman after the CECPC Chairman received members of the Buhari Campaign Organisation, BCO, who paid him a courtesy visit, he said the party was bound to have some frictions among its membership because of its huge size.

“A party as large as the APC with over 41million members is bound to have some differing opinions among stakeholders but it is very surmountable. We are on top of the situation and we are optimistic of approaching the National convention and the 2023 general elections with a united front.” he said.

Buni assured that the party would partner the BCO in all its activities, saying “The BCO is a very strong organisation with a wide reach out. The party will work closely with you during the convention and general election.”

“We are here to assure you of our total support to a successful convention and the 2023 general elections,” he said.

Meanwhile, efforts at reconciling the Governor Abdullahi Ganduje of Kano State and Senator Ibrahim Shekarau factions in the state have collapsed over sharing formula, as former Governor Shekarau led faction rejected the guidelines for harmonization of party structure released by the APC national headquarters.

Recall several efforts to reconcile the warring factions with series of meetings held at the instance of the APC headquarters led by the Chairman, CECPC, Mai Mala Buni which told the factions to expect a template for the harmonization and sharing formula of the party structure in the state.

A letter by the Chief of Staff to the CECPC Chairman, Abdullahi Y. Gashua Monday night named Governor Ganduje as head of the state supervisory committee to harmonize the party structure in the state.

In a swift reaction, the Shekarau led faction in a letter titled “RE: Guidelines For The Harmonization of The Party Structure In Kano State”,  said among others that the faction rejected the sharing formula and naming the Governor as head of the committee.

“Furthermore, to our utter dismay and disenchantment, the letter had even gone viral in the social media emanating from Kano State Government circles even before reaching us, mischievously paraded as conclusive evidence that the party would be surrendered to the”  Abdullahi Umar Ganduje faction. In the circumstances therefore, we are constrained to notify you Sir, that the entirety of the content of your letter is totally unacceptable to us.

“Once more, we wish to reiterate our firm commitment to the promotion and preservation of the integrity of our great party and its leadership. We wish you Allah’s guidance and protection as you continue to pilot the affairs of our great party, the All Progressives Congress (APC),” the faction said.

His Report Was Culled From Vanguard