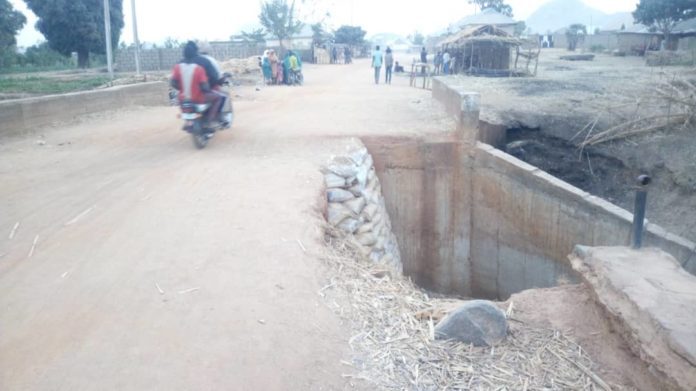 The communities of Gwallagan Mayaki, Rumba, Dan Dango and Yamrat of Bauchi Local Government have decried lack of access road linking the communities to the state capital.

They said the road linking them to Bauchi metropolis remains in bad shape despite several pleas made to relevant concerned authorities to that effect.

The four affected communities contribute significantly in feeding the state capital with the required daily vegetables and foodstuff all year round.

As the rainy season approaches, they feared that they will be totally barred from reaching Bauchi metropolis as the boss culverts at the outskirt of Gwallaga, which is the gateway to the state capital, is on the verge of being washed away by surface runoff water.

Some residents of Dan Dango told LEADERSHIP  that the condition of the road is so terrifying enough so much that they are not sure the road will survive next rainy season.

In its present status, residents of the four communities find it extremely arduous to commute farm produce from their farms to the market, something that in most extreme cases lead to an inestimable loss on the side of the farm owners who depend on commercial farming to earn a living.

Rumba Youth Leader, Bello Maisauru, told our correspondent that the road did not only affect their day-to-day movement but also hampered education in the areas as, oftentimes during the rainy season, cannot take their wards to school.

“Sometimes during the rainy season, our children used to spend days at home without going to school. This is not helping them education wise.

“Women are not spared too. Some of them die on labour before they are being taken to the hospital in Bauchi metropolis.

“The road defied all communal effort geared toward maintaining it. Each year, we mobilised for labour to fix the fixable parts of the road to ease transportation difficulties on the people plying the road,” he said.

To residents of the affected communities, when constructed, the road would ease most if not all of their problems and also improve their economic status.

They appealed to Bauchi State Governor Bala Abdulkadir Mohammed to consider them in his massive road constructions throughout the state to save their future.