Bauchi Police Hands Over 25 AK-47 Rifles, Over 6000 Ammunitions To NSA 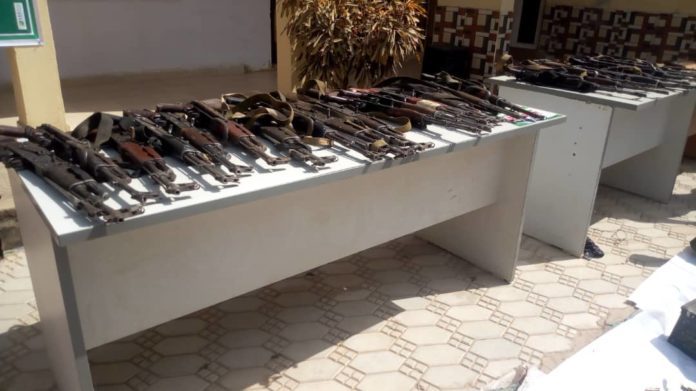 Between July 2021 to February 2022, the Bauchi State Police command has recovered 25 AK-47 rifles and over 6000 illegal ammunitions in the state.

CP Umar Mamman Sanda, Commissioner of Police Bauchi State, divulged this on Tuesday at the Command’s headquarters in Bauchi during the official handing of over the recovered weapons to the National Center For the Control of Smal Arms and Light Weapons, under the office of the National Security Adviser, NSA, to the president.

The Federal Government of Nigeria is determined to stop the senseless bloodletting and insecurity occasioned by Small Arms and Light Weapons in circulation within our communities by mopping up all illicit weapons; as well as control the proliferation of all weapons in the holdings of all arms-bearing agencies/organizations in the country.

“It is in this vein that President Mohammadu Buhari GCFR, approved the establishment of the National Centre for the Control of Small Arms and Light Weapons in March 2021 to institutionalize SALW control at all levels of the polity; and to mainstream illicit SALW eradication efforts.

“I, therefore, urge all members of the public to support the Government in its efforts to eradicate illicit SALW in circulation and by extension, promote an illicit arms-free society,” he said.

CP Sanda said a robust synergy and partnership with sister security agencies, local security outfits, and other non-governmental organizations was cultivated in order to nip crimes of various degrees in the bud and flush criminals out of the state.

Chris Owolabi, Director of Operations National Center For the Control of Small Arms and Light Weapons, said that the federal government will intensify efforts towards mopping up more weapons and ammunition across the country.

“It is not only in Bauchi state Command alone. Just three weeks ago, we made some recoveries in Owerri, Imo State in collaboration with the National Security and Civil Defence Corps. We do this with security agencies across the nation to recover these firearms.