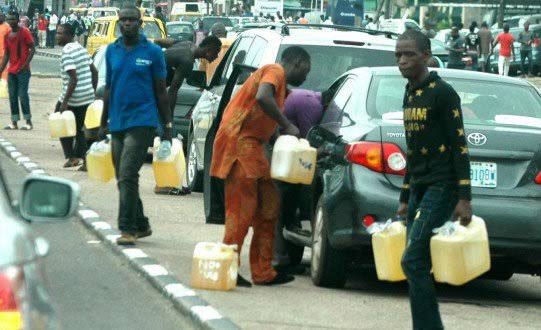 Bauchi State has witnessed another wave of fuel scarcity, forcing many stations to shut operation.

The tide, unfortunately is favouring black marketeers as a liter of petrol now goes for N300 — against the average pump price of N165.

However, a thin line differentiates black marketeers with petrol stations. While the latter peg their price at N220 [depending on your location within Bauchi], the former have no regulated price as well — the minimum price one could get a liter is N300.

Fuel scarcity hit Bauchi and other parts of the country in March. But within two weeks, the price receded to the average pump price.

The development came barely two months after the federal government suspended its plan to remove fuel subsidy in July.

WikkiTimes understands that motorists, cyclists and other users often resort to black market points as a result of long queues in petrol stations. Though stations operating at the moment were few.

Despite the frustrating queue, Bala Ado, a cyclist, said the station he knows dispensing was later shut down.

“I went there and learnt that I can spend hours without getting the fuel. That’s why I decided to go and buy from black marketers at N300 per liter,” Ado told WikliTimes.

Customers were later left stranded, because the station was closed “when it ran out of fuel,” he added.

Ado alleged that some stations hoard the product to sell it “only to black marketeers with jerrycans, at a high cost.” According to him, petrol is always available at such stations.

‘10 Instead of 30 Trucks Now Supply Fuel To Bauchi’

Ibrahim Mijinyawa, the head of Retail Outlet and Monitoring unit in the Department of Petroleum Resources (DPR), Bauchi State, justified the scarcity.

He blamed the fuel dearth on decrease in the supply of the product. The decrease, according to Mijinyawa, was a form of protest by transporters demanding their arrears from the federal government.

“There are about 30 to 35 trucks coming to Bauchi daily,” Mijinyawa told WilkiTimes. “But we have only 10 trucks for the whole state now.”

“It originated from the transporters of the petroleum demanding their outstanding payments accumulated without being paid,” he stated.

Mijinyawa however said his unit monitors stations to ensure compliance while expecting delivery.

“We are currently waiting to get trucks from Kano and Gombe States,” he hinted. “As soon as they arrive, we go round to ensure that defaulting stations are sanctioned and sealed.”

He disclosed that DPR during its tour to six local government areas sealed 17 fueling stations that failed to comply with the standard pump price.

However, Mijinyawa was not sure whether some stations hoard the product for black marketeers.