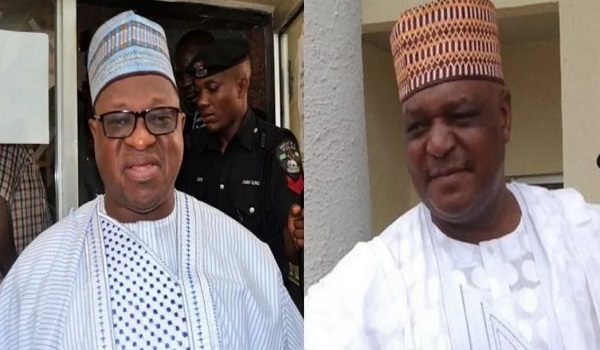 The Council of State led by President Muhammadu Buhari has on Thursday approved the pardon of 159 convicts including former Governors of Plateau and Taraba States, Senator Joshua Dariye and Jolly Nyame who were imprisoned for stealing N1.16bn and N1.6bn respectively.

WikkiTimes recalled that Dariye and Nyame were convicted by Justice Adebukola Banjoko of the Federal High Court Abuja in 2018.

However, Dariye’s prison term was later reduced to 10 years by the Court of Appeal in Abuja while his conviction was affirmed by the Supreme Court.

The Attorney General of the Federation and Minister of Justice, Abubakar Malami, while addressing journalists after the Council of State meeting in Abuja, said the council approved 159 out of 162 applications presented for consideration for the prerogative of mercy for convicts and inmates in correctional facilities nationwide.

The council rejected a proposal to grant pardon to a former Managing Director of Platinum Habib Bank, Francis Atuche, as one of the people not fortunate to be pardoned sentenced to 120 years for theft of over N25bn.

Among those in attendance were Vice President Yemi Osinbajo, Secretary to the Government of the Federation, Boss Mustapha, National Security Adviser, Major General Babagana Monguno, Chief of Staff to the President, Prof. Ibrahim Gambari, Attorney General of the Federation and Minister of Justice Abubakar Malami as well as governors.