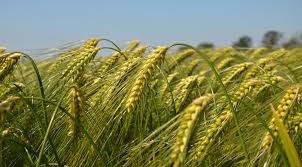 The Central Bank of Nigeria targets a 50 percent increase in Wheat production from 150,000 metric tonnes to 300,000 just as farmers across the country await the commencement of this year’s rainy season.

The apex bank has also trained over 250 extension workers with a reach of over 120,000 farmers in a bid to cascade learning to farmers in their respective locations.

The CBN governor, Mr Godwin Emefiele, made this known during the launch of 2021/2022 Brown Day and wheat harvest at Gabarin village in Ringim Local Government Area of Jigawa State.

Represented by the Dutse branch controller of the bank, Sa’adatu Ibrahim Aminu, the CBN governor said the objective of the new target was to cut Nigeria’s wheat importation in the next two years by scaling up wheat production capacity in the country.

The training is also to ensure good agronomic practices (GAP) in the area of capacity building for wheat farmers across the value chain, he noted.

The current wheat situation in Nigeria reveals that the country spends about $2billion annually importing over five million metric tonnes of wheat to meet local demand, making it one of the highest food import bills.

Unfortunately, local production is still just about one per cent of the local demand issues, leading to low production, which equally includes low yields, poor irrigation facilities, lack of ready market for the product, and lack of sufficient high yield seed varieties.

The world is currently feeling a heat on wheat imports as Russia and Ukraine, which account for over 30 per cent wheat exports, have been in a faceoff for nearly one month.

Emefiele further said the CBN had commissioned four seed companies to process 25,000 metric tonnes for the next planting season. This strategy, he said, sought to reduce wheat importation by 60 per cent in two years and eliminate wheat importation over the long term.

He said the bank had also facilitated and financed a seed multiplication programme that would help to sustain the propagation of the seeds and guarantee the availability of high yielding seeds.

According to the CBN boss, the bank’s collaboration with Flour Mills of Nigeria identified, validated and cultivated demonstration farms to holistically showcase the improved protocol for wheat farming in Nigeria and the impact of GAP on high yields to farmers.

He explained that apart from the Anchor Borrowers Programme of the bank, which has led to a total disbursement of over N975.6 billion to over 4.52 million smallholder farmers, cultivating 21 agricultural commodities across the country, the bank had other interventions targeted at addressing the financing needs of specific nodes of the agricultural value chain.

He added that to ensure access to finance, especially for businesses that have the potential to drive economic growth, promote diversification and improve productivity, the CBN recently introduced the 100 for 100 policy on production and productivity.

The governor added that, so far, the CBN had disbursed N29.51billion to 31 projects, with 13 of them in agriculture.

The Director of Research at the Lake Chad Research Institute, (LCRI), Dr Oluwashina Gbenga Olabanji, described the event as “very historic,” being the first time Nigeria was witnessing total area of wheat production.

The head of the agency, which has the national mandate for genetic improvement of wheat in Nigeria, said, “Today we have cultivated almost 150,000 hectares of wheat in Nigeria, which is unprecedented. And from what we have gathered so far, some farmers have started recording some 4 to 5 tonnes per hectare on their farms, which is very impressive.”

He said the institute had released 12 varieties of wheat to farmers, adding, “Today in Jigawa, I can see improved wheat varieties, some of which are the recent ones brought by the CBN. And it has been recorded that farmers are getting above four tonnes per hectare.

Olabanji maintained that with the FMAN policy of wholesale purchase of wheat from farmers, more wheat producers would be encouraged into the production, not only because of the ready market availability for the products at good price, but also because of the competitiveness of the Nigerian wheat.

In February this year, the CBN flagged off the Nigerian Brown Revolution (NBR), which is a wheat value chain intervention. The initiative also seeks to expand land under cultivation in wheat to marginal and new areas, in addition to having two cultivation cycles in a year.

And for the first time in the history of Nigeria, wheat is cultivated under the rain-fed conditions on a large scale, and the effort will add about 2,000 tons to the national seed stock and potentially increase the country’s wheat output by 750,000 tons annually.

President Muhammadu Buhari, who was represented by the Plateau State governor, Simon Lalong, charged Nigerian farmers to embrace wheat farming and stop the import of the product, which gulps over $2billion annually.

“It is important to stress that Nigeria currently spends over $2billion on the importation of wheat annually, one of the key contributors to the country’s huge foreign import bill. This is because millers have had to resort to importing wheat to meet the huge demand for by-products,” the president said.

Emefiele, who was represented by a deputy governor of the bank, Edward Lamtek Adamu, said the event heralded the commencement of the NBR journey, which is the first major wet season wheat production in Nigeria, with about 700 hectares put under cultivation in Kwall, Kassa, Jol, Kafi Abu and Sop in Jos, Plateau State.

He reiterated that while the short-term implication of this is the addition of about 2,000MT of seeds to the country’s seed stock, the country can now potentially add 750,000MT of wheat to her output annually through rain-fed wheat cultivation in Plateau, Mambila Plateau in Taraba and the Obudu Plateau in Cross River.

Also in the week, the CBN unveiled 21 maize pyramids in Kaduna State, which it said would boost maize production towards promoting food security and self-sufficiency.

Emefiele also said maize demand in Nigeria was estimated to increase at an average of 3.2 per cent per annum, largely due to population increase and urbanisation.

“The objectives of the CBN intervention are to increase maize production by 1.6 million metric tonnes, create jobs and enhance the skills of Nigerian people in maize commodity, facilitate easier access to funding for farmers and improve and grow the economy,” he said.

The president of the Maize Association of Nigeria (MAAN), Dr Bello Abubakar, said the pyramids had demonstrated the capacity of the MAAN in mobilising Nigerian farmers to produce what can sustain the country and even export over a period of time.

He said, “The MAAN is not just supporting food security but food and nutrition security with the collaboration with HarvestPlus to promote the production and consumption of nutritious vitamin A maize in Nigeria. There are 21 pyramids, each constructed with between 30 to 79 trucks of maize.”

The Minister of Agriculture, Dr Mahmood Abubakar, who was represented by the North-West zonal director of agriculture, Dr Timkat Vontav, said the Anchor Borrowers Programme of the CBN had been able to close the gap between the supply of maize grains and its demand by domestic and industrial users.