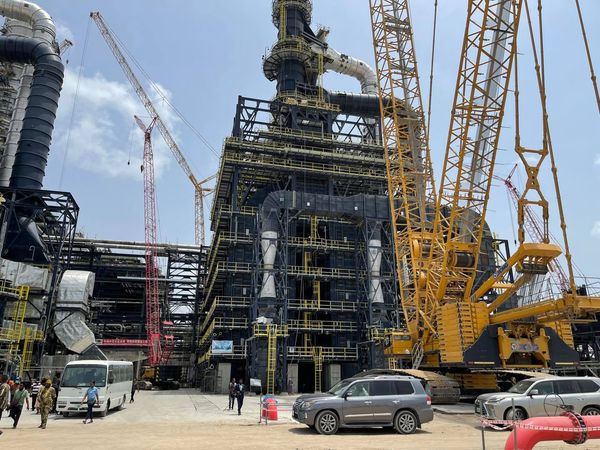 The Minister of Information and Culture, Alhaji Lai Mohammed, has stated that the Dangote oil refinery due to open later this year will be providing 650,000 barrels per day while the $2.5 billion Fertilizer Plant will produce 3 million metric tonnes of urea every year.

The Minister made the remarks in Lagos on Sunday while touring the sprawling complexes of the refinery and the fertilizer plant in Ibeju-Lekki said the coming on stream of the Dangote Petroleum Refinery and Petrochemicals, as well as his Fertilizer Plant, will help to ensure energy and food security in the country.

Alhaji Mohammed, who was accompanied by 25 journalists, said while the refinery will ensure the availability of the highest quality Euro V Grade petroleum products, the fertilizer plant is producing granulated urea, which is of the highest quality and which does not become sticky and cause loss of value to the farmers.

He said the 650,000 barrels per day Dangote Refinery, which is expected to be commissioned this year, will be a game changer in terms of employment generation, contribution to the GDP and conservation of foreign exchange.

“Gentlemen, based on what we have heard here today with regards to the 650,000 barrels per day Dangote Refinery, it would be a game changer once it comes on stream in terms of employment generation. The refinery as of today employs 35,000 people everyday.

He said the Dangote Fertilizer Plant, which was commissioned by President Muhammadu Buhari last month, has made Nigeria the leading producer of urea in Africa.

“We were fortunate to witness a ship being loaded with urea for export to Argentina during our visit today,” Alhaji Mohammed said.