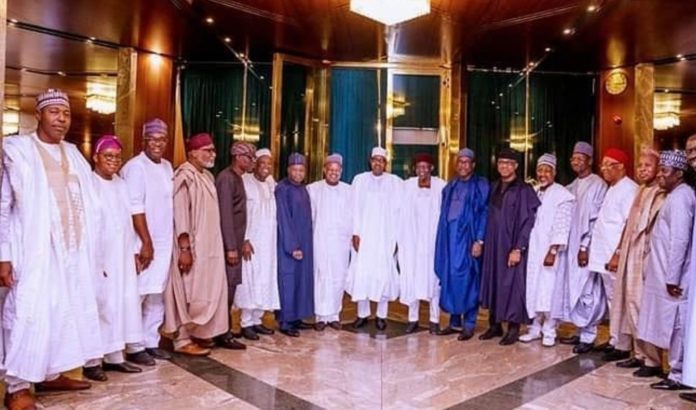 Governors on the platform of the All Progressives Congress at the end of their meeting on Sunday night claimed that the February date for the Convention where substantive national officers will emerge would still hold next month.

Addressing newsmen at the end of the meeting which lasted for over three hours, Kebbi State Governor and Chairman of the Progressive Governors Forum, Abubakar Atiku Bagudu, declared that the February date is sacrosanct.

He refrained from giving the actual date in February as he told journalists that the APC Caretaker/Extraordinary Convention Planning Committee would announce the date.

He said: “We are one group of stakeholders in the party and our party respects institutions. The appropriate organ of the party is the National Caretaker Committee that will announce the date.

“We have agreed and they will announce a date in February but the announcement comes from the party. It is the party decision. There are other stakeholders that they are consulting and to show respect and institutional limit, we are not going to overstep our bounds. February is sacrosanct.”

Tribune Online checks however revealed that the February date w/could be reviewed as the Independent National Electoral Commission INEC expected to supervise the APC Convention announced, at the weekend conduct of bye-elections in six Federal Constituencies across the country for February 26.

The ruling party is expected to field candidates in the two scheduled elections.

Aside from the two elections, APC CECPC is expected to give the Commission statutory 21 days notice before conducting its National Convention.

In a veiled reference to the agitation for removal of serving governors who are members of the interim national leadership of the Party, the governors passed a vote of confidence in their colleagues who are holding elective and party positions.

“We spoke about our unanimous appreciation of Mr President and especially the confidence he has in the Forum and we also passed a vote of confidence in the National Caretaker and Extraordinary Convention Planning Committee of the party chaired by Governor Mai-Mala Buni and including two other Governors, Abubakar Bello of Niger State and Gboyega Oyetola of Osun State who have done an incredible job of running our party successfully, mobilising people into the party and we are very happy with their conduct. We discussed our upcoming convention which you may recall I had cause to address the press after we visited the President in November 2021 where we expressed that both Mr President and the party have agreed that the convention will take place in February. “So, we took inputs about the reviews and we noted that all the misrepresentations in the press that we seek to correct; that the Progressive Governors Forum is one united body as you can see evidently in attendance and our decision is unanimous. We are united behind Mr President and we thank him and we are united behind the Caretaker and Extraordinary Convention Planning Committee.”

Previous article2023 Presidency: Stop Demonising Your Opponents, APC Spokesman Tells Aspirants
Next articlePlastic As Tuition: A School In Lagos Is Reducing Waste, Providing Quality Education All At Once