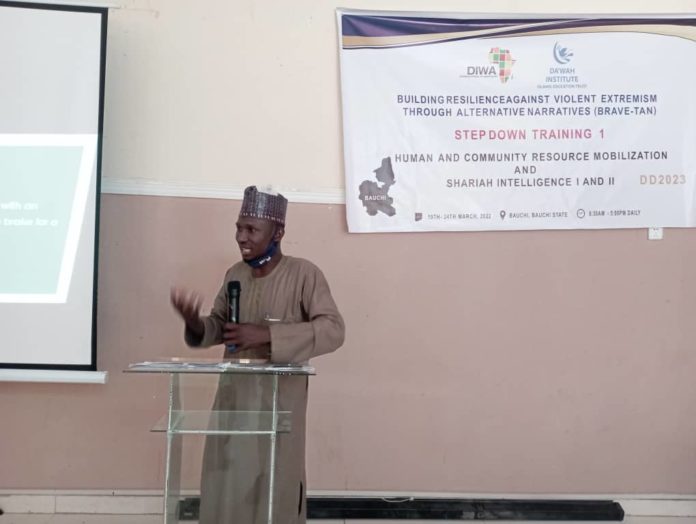 To halt the tide of the spread and devastating repercussions of violent Extremism among Muslim youths in Nigeria, the Development Initiative of West Africa, DIWA in collaboration with Da’awa Institude of Nigeria, DIN has organised a six-day training for selected Imams and preachers in Bauchi.

The training which is facilitated through the Train of Trainers initiative of Da’wah Institute of Nigeria drew participants from three local governments of Bauchi State, one from each senatorial zone.

Sani Mu’azu Tama, Coordinator Train of Trainers Bauchi State said the session is designed to empower the participants with ideas and skills of how to spot and guard against extremist ideologies, hence be able to disabuse the minds of extremists among their subjects.

He said facilitators of training were initially trained in a two weeks orientation in Minna.

Mr Tama said at the end of the exercise, the participants are expected to mobilize people at the grassroots to shun extremist tendencies.

Dr Ibrahim Umar Disina has called on both preachers and adherents of Islam to emulate Prophet Muhammad Peace be Upon Him.

He said knowledge is a trust, hence anyone who has a portion of that trust must be seen to be doing something that resonates well with true teachings and values of pure knowledge.

He called on youths to open up their minds to be able to see issues from a clean perspective to guard against any corrupt ideology unscrupulous preachers belabour to pass on to them.

On his part, Dr Adamu Muhammad Hamid blamed poverty and lack of exposure on the part of youths to be factors panning the spread of extremism among youths.

He said science should never be seen as a tool to promote hatred for western education among the Muslim population as witnessed previously in Nigeria.

Dr Hamid called on students seeking knowledge to clean and purify their intention to be able to build a peaceful and progressive society for the common good of all.