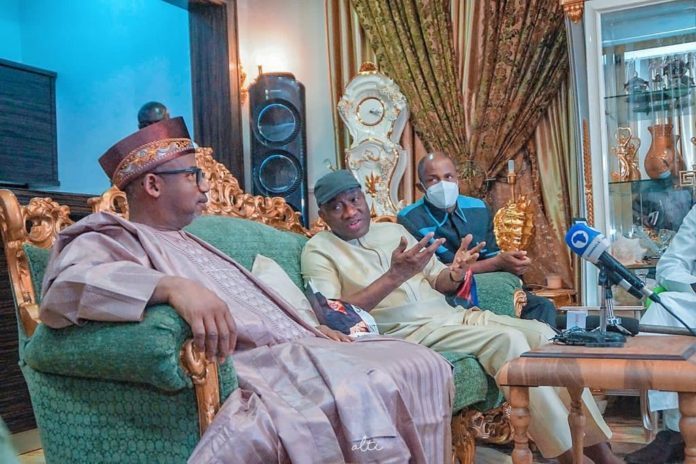 Nigeria’s former President Goodluck Ebele Jonathan has endorsed Bauchi State Governor Bala Mohammed for President come 2023, describing him as a man with “patience, humility, fortitude and a good listener for a better Nigeria.”

In a statement by the Governor’s aide on new media Lawal Mu’azu Bauchi, Jonathan was quoted appreciating Bala Mohammed for being him with even after his ouster in 2015.

Jonathan was speaking when he received in audience, Governor Bala Abdulkadir Mohammed at his Abuja residence. GEJ recalled that Mr Mohammed was among his hardworking ministers when he was Nigeria’s President.

“GEJ appreciated Bala Mohammed for being with him even after office saying that he could imagine a better Nigeria with an empathetic, committed and passionate leader if Bala is given a chance to run the affairs of Africa’s most populous state”, the statement read in part.

GEJ opined that Mr Mohammmed has what it takes to “actualize the aspiration of Nigerians considering his tremendous achievements as the FCT minister and now a governor.”

“Goodluck Jonathan said as a thoughtful and responsible father, he is confident Bala Mohammed will make a difference by providing Nigerians with exemplary leadership.

“He commended Governors Bala, Wike Ortom and Darius Ishaku for making him and their respective states proud calling on their counterparts to emulate their dedication and service to humanity”, the statement added.

The statement says Governor Bala visited GEJ “alongside members of his team at the residence of the former president to seek for his blessings and inform him of his aspiration to run for the office of Nigeria’s President in the forthcoming election.”

The Governor was quoted showering encomiums on his former boss, GEJ whom he described as “a hero for his commitments” in strengthening Nigeria’s democracy.

WikkiTimes recalled that Mr Mohamed was also endorsed by Rivers State governor Mr Nyesom Wike to vie for the highest office in the land.