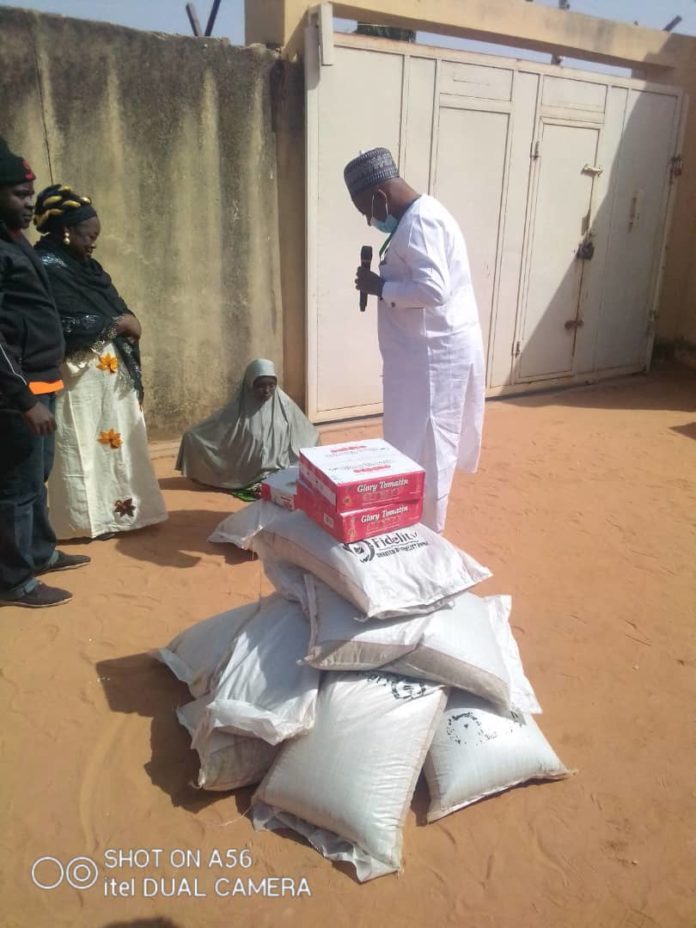 Kishimi Shelter and Care Foundation, a Gombe based Civil Society Organisation has distributed food items to 120 HIV patients and widows in partnership with Fidelity Bank.

The aim is to empower less privileged persons in the society to feed themselves and their children at this time when the economy of the nation blows nobody any good.

The foundation presented the items to about 120 beneficiaries on Friday at its secretariat located at Investment quarters Gombe.

Executive Director of the organization Mrs Grace Tony while distributing the food items explained that 70 bags of rice, 50 bags of maize weighing 25 kilograms each and 20 cartons of refined tomatoes would be shared with the beneficiaries.

According to her Kishimi Shelter and Care Foundation was established in 2008 with the objective of supporting vulnerable children including ‘almajiris’, orphans, HIV positive children and widows.

She said their mission is to see a society where women and children are equipped and empowered for a good living.

Also speaking, the operations manager of Fidelity Bank in Gombe Isah Yahya said the bank supported the foundation to distribute the food items as part of the bank’s social responsibility to the host community.

He added that the commercial bank had in the recent time provided interventions in the Gombe State University, the physically challenged school in the state, renovated office for the foundation and now donated foods for distribution to less privileged through Kishimi foundation.

Responding, one of the beneficiaries, an HIV patient (Name withheld) appreciated the bank and the foundation for the gesture claiming that her husband ran away from her and left her to cater for the children when he realized she was infected with the disease.

She called on other HIV patients to take their medicines as at when due to remain hale and hearty.