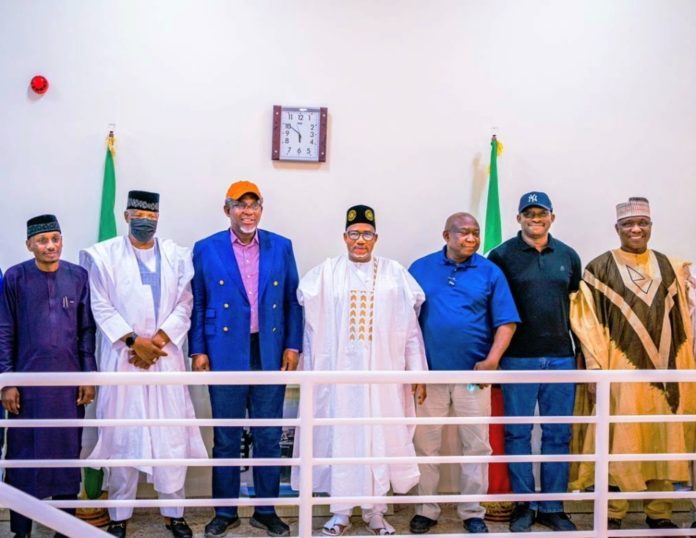 The Bauchi State Governor, Sen. Bala Mohammed has commended the Federal Government’s decision to establish a Kaolin Processing Plant in Bagurja/ Sabuwa Gwaram, Alkaleri Local Government Area of the state, stating that the state will take advantage of the abundant Kaolin mineral in the area to improve its revenue profile.

The Governor gave this commendation when the Minister of Mines and Steel Development, Arc. Olamilekan Adegbite paid him a courtesy visit in his office after inspecting the Kaolin processing plant in the state.

Sen. Mohammed said Bauchi State is rich in mineral resources and welcomed the establishment of Kaolin processing plant in the State, just as he noted that Kaolin is found in different parts of Bauchi especially, Alkaleri Local Government.

The Governor said the State recognized that mining is in the exclusive list and assured the Minister of his State’s preparedness to cooperate with the Federal Government as a sub national entity, even as he emphasized the need for the State to look inwards and take advantage of its abundant mineral resources to meet its financial obligations.

“We will fulfill our responsibility in respect of the provisions of the Constitution, we will ensure that community relations, community engagement is good so that investors will come in and of course as a sub-national, nobody stops us from owning and participating in mining activities”, he explained

He appreciated the Minister for taking time out of his busy schedule to visit the clusters in the six geopolitical zones to monitor, evaluate and have on the spot assessment of job already done.

“If we have been working like this as federal officers, then things would not have been the way it is, public officers would have been in positions to know precisely what is happening outside the comfort zones of their offices and here you are, in spite of the insecurity, the perception and negative narratives, you have shown yourself as a patriot”

The Minister, earlier in his remarks explained that the establishment of the clusters in the six geopolitical zones is part of the Federal Government’s efforts to stimulate the economy after the adverse effects of the Covid 19 pandemic.

Hon. Minister of Mines and Steel Development, Arc Olamilekan Adegbite during the inspection of the ongoing construction of Kaolin Processing Plant in Bagurja/Sabuwan Gwaram, Alkaleri Local Government Area of Bauchi State over the weekend

In his words, “we are in that process that we feel that any mineral that is mined in Nigeria should be processed locally, so that there will be some beneficiations, we are losing a lot of money, we are losing wealth as well as our jobs by exporting raw ore.”

The Minister disclosed that there is a downstream policy in place that would prevent the exportation of raw ores. “As a demonstration of that, we chose to use the money that we received to establish processing centers in the six geopolitical zones of the country as a result of which the one for Northeast Zone has been established in Bauchi”, he added.

He said the establishment of a Kaolin processing plant in Bauchi would put an end to the exportation of raw Kaolin and the importation of industrial grade Kaolin for pharmaceutical companies in the country.

“Kaolin is in abundance here, let’s process Kaolin to industrial-grade for pharmaceutical companies here in Bauchi and what we are doing is like a pilot programme, there is a lot of Kaolin here and there is room for other investors, maybe in a different local government to also process Kaolin”, he further assured.

He noted that Kaolin is used in the pharmaceutical industry, cosmetics industry, paint industry as well as in the paper industry and emphasized the need to mine it, create wealth, jobs and generate revenue for the government.

While inspecting the Kaolin Processing Cluster in Alkaleri, the Minister expressed satisfaction over the level of work done.

He said Kaoline produced in Alkaleri would be processed and used locally while the excess could also be exported.

Adegbite said what the government has done in the six (6) geopolitical zones is to develop the mineral that is in abundance in different zones of the federation and demonstrate possibilities to would-be investors that they can replicate the processing plant in another belt, taking advantage of what is been produced there.

“We have kaoline here and that is why we have decided to process here so that you don’t have to be transporting them a long way, so the plant is in the middle of a kaoline belt where a lot of people, artisanal miners who mine kaoline can just bring it here for processing in their hybrid way”, he stated.

He encouraged investors to invest not only in mining but also in processing as he emphasized that whatever is mined in Nigeria must be processed in the country.

The Minister said Nigeria currently has over 44 minerals and has only established six (6) processing zones which simply means there is room for investors to come in.