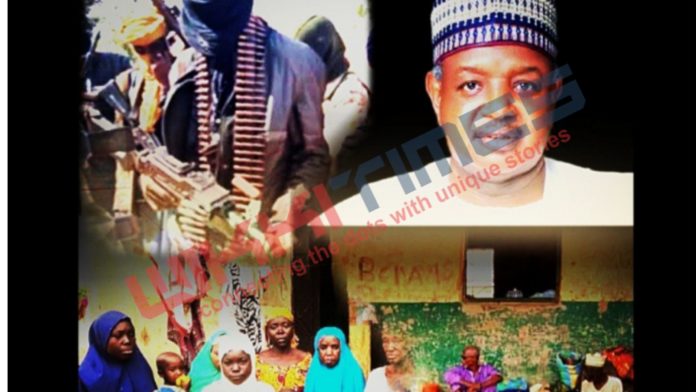 In several condolence visits and numerous press releases, the Kebbi state government has pledged to fight armed banditry and restore lasting peace to the state. These pledges do not change much for local residents of affected communities.

Once in 2021, the state governor, Atiku Bagudu had even pledged to lead a search and rescue mission into the forest to secure the release of the Yauri students who had been kidnapped.

About one year later, there has been no search team led by the governor and only 56 students have been released with over 65 more still with their abductors.

In his recent condolence visit to IDP camps under the Danko Wasago, a council heavily disturbed by banditry, the governor had assured the IDPs that normalcy would be restored in the local government and affected persons will be able to return to the settlement and restarted socioeconomic activities peacefully.

However, gunmen continued to operate in many areas of this local government unfettered. In March, about a month after the governor’s statement, bandits raided villages under the local government for nine days consecutively.

The attacks which occurred between the 13th and the 21st of the month were executed without any counter.

An official of the state government who spoke solely on anonymity told WikkiTimes that about 25 people were killed during the attack and 60 others were kidnapped.

Kebbi State is scourged by rural banditry. The bandits, a gang of heavily armed criminals, have been operating in the state since 2019 and the situation keeps getting worse. Zuru Emirate, the target area in the state, is battling continuous killings, abduction, displacement of residents, and cattle rustling.

Brazenly, the bandits made monstrous demands from the residents of Sabongari Yababa, But, the villagers refused to comply and the result was, as expected, more and more attacks.

Sadly, villagers have fled to other havens due to unabated attacks. Dandere Godebi, 34, one of them, helpless and hopeless, left his village alongside his new bride because that decision was the best at that time.

“They asked to be allowed to rape our wives,” Dandere said. Ridiculous. That was not the end, “They also imposed an N500,000 monthly levy on us”, Dandare narrated.

He said residents had to pay monthly levies to bandits, but their wives are continuously raped, unhindered.

Dandere’s home had suffered bandits’ attacks several times. The crisis reached its peak in 2022, “to the point that I had to flee with my wife whom I married only a few months ago,” Dandere recalled.  This was after eight of his family members were abducted. Dandere and his relative had to raise 4 million naira as a ransom for the abductees.

WikkiTimes investigation showed that attacks in the affected areas are often unhindered as security forces are unavailable to subdue the terrorists. This has given the bandits increased access into the state, culminating into heightened violence.

Fidelis Baba, an indigene of Zuru disclosed to this paper that most bandits’ attacks go unchecked. According to him, the bandits spend days in the areas they attack.

He noted that sometimes, news of a potential attack reaches the public but nothing is done to prevent this.

“During an operation, the bandits spend like two to three days in the axis they attack. They rustle cattle, displaced villagers and leave unchallenged.  There has never been any serious challenge against the bandits,” he revealed.

According to the Kebbi police spokesperson, Nafiu Abubakar, security officials deployed to the affected areas have recorded progress in curtailing attacks from the terrorists.

Nafiu claimed the state has not recorded any recent violent attacks by terrorists.

“For a long time, we have not been attacked and it’s a success for us. The police command has deployed forces to these places and even the inspector general of police also assisted the command by deploying more security officials. They are all there. They were deployed along the border area to prevent bandit infiltration into the state,” Nafiu said.

However, WikkiTimes investigations showed that the police claims of checking the excesses of the bandits is not true. This newspaper documents myriad banditry attacks in the state within the last few months.

In early January, the bandits’ attack left 13 people dead, including two soldiers and a policeman in Danko Wasago council. A few days after the attack, the bandits struck again, raiding three communities under Waje district in Zuru and three persons were killed in the attack while the group carted away several farms’ produce.

Gunmen in March killed at least 62 members of the state volunteer vigilante group known in local parlance as, “Yan Sa Kai”. The attack according to Reuters is the worst violence to hit the state since January.

In the same month, gunmen attacked and killed four policemen and seven civilians. The incident was barely seven days after an attack that claimed the lives of over 17 security operatives.

Again, armed bandits abducted 2 people for supposedly trespassing on their free areas and demanded a sum of N400,000 to be paid as ransom for each.

WikkiTimes learned that villages in Kadruga, Zodi, and Dabai town in Zuru were attacked by gunmen in April.  The criminal group operated in the axis for three days, displacing families, and rustling cattle.

Data by the Nigeria Security Tracker (NST), a project of the Council on Foreign Relations, identified Kebbi state as one of the most violent states in Nigeria within the last three months

‘Displaced persons not from Kebbi’

Despite the constant attacks on villagers by gunmen in Zuru emirates, the chairman of Danko Wasago local government, Aliyu Bena said no residents of the state have been displaced and IDPs seen around are from neighbouring states.

The council chairperson told WikkiTimes that the military deployed to Zuru was able to curtail the overspill of violence from Zamfara and Niger. Bena claimed that the state is only housing the displaced persons from states plagued by violent attacks. WikkiTimes’ check shows that the LG Chairman’s claim is not true.

For instance, Sakaba and Danko Wasago LGA are the major parts of Kebbi where armed banditry is thriving.

Within the past four months, there have been numerous bandits’ attacks in both local governments leading to the displacement of over 2000 people.

Mohammed Inua, an IDP in Sakaba LGA who was displaced in early February decried the heightened insecurity in his area. Sabaka, who hates his living condition in the dilapidated building where he and his family dwell, is terrified of returning home.

WikkiTimes also learned that the bandits have successfully created a camp in Daji Jode village and seek to establish and control more territories.

Local sources told this paper that, Bandits’ pursuit of more camps and increased access in the state is one of the reasons behind the surge in attacks perpetrated by the terrorist group.

Bandits have also warned villagers to stay off certain villages under the Danko-Wasagu local government. These villages have been seized and are considered bandit territories.

Imada, an IDP in the Diri Daji community, was sent back home by a group of bandits occupying his village when he tried to return.

He told WikkiTimes he was asked by the bandit to leave Matari, his village, and never return.

The IDP, who felt fortunate to be left unharmed, told this paper that he was asked to warn others to stay off the village.

“Few days after staying in Dirin Daji, I decided to relocate back home. I had assumed that the bandits would only loot the village and leave afterwards. But I met you there. They paraded the village with their ammunition. I was asked to leave and never return. They also ordered me to pass the information across to others,” he explained.

Banditry is thriving in the state due to the inefficiency of the state government, says Bamaiyi Aniko, a human rights activist and resident of the Zuru emirate. According to him, tackling bandits requires proactive effort but the government is putting in the barest minimum.

Many rights groups interviewed by this newspaper say continued cover-ups and denial by the state government is exacerbating banditry in the state.

For Isah Hudu, a journalist in the state, reporting on the security situation is a difficult task as the authorities “are always unwilling to speak on the situation.”

The journalist recounted his last experience with officials of the government who “adamantly refused to speak”, despite repeated calls and text messages he sent.

Isah said the reluctance of the government officials to address journalists on the state’s security challenge “was a glaring attempt to control information reaching the public.”

“I always contact the government authorities whenever there is an attack, but they do not respond. I spend days calling and texting officials to speak on an attack without success,” he said.

He disclosed that some residents of the affected areas have also been warned by officials to avoid speaking to the press.

Hayato, another journalist who spoke with this paper said that mediated information reaching the public contributes to the low coverage of insecurity in the state.

“There is control of information; the government doesn’t want anyone talking about the challenge in the state.  This is one of the reasons why the situation has escalated,” he said.

“Trying to get vital information from the state government or the security personnel is a serious problem because they always refuse to address the issue at hand. They do not pick our calls or even listen to us.”

WikkiTimes also had a taste of the censorship; for, efforts to get the special Adviser on security to the governor, Garba Rabiu Kamba to respond to the story proved abortive. Several calls and text messages sent to him were ignored.

By consistently denying and censoring information about armed banditry in Kebbi, the government is stifling efforts to arrest the situation.