I Fear For My Safety, That Of My Kids—Atiku’s Ex-wife, Jennifer, Alleges Threats To Life 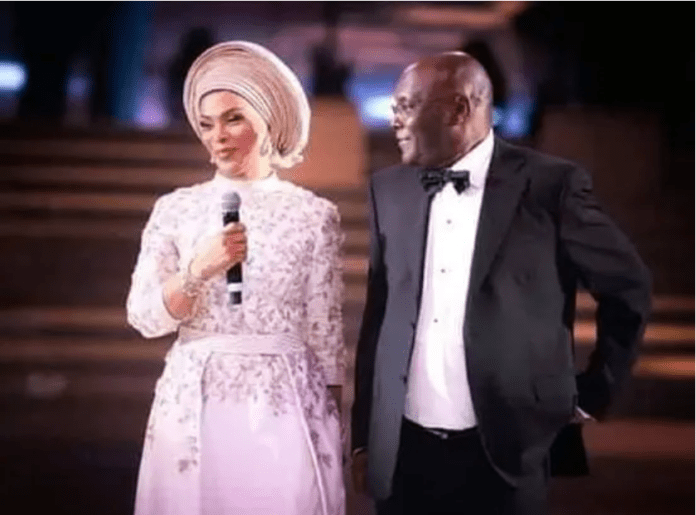 Jennifer Abubakar, the ex-wife to former Vice President, Atiku Abubakar, has alleged threats to her life and that of her kids, Daily Trust can report.

Jennifer in a statement alleged that she had been receiving threats from members of Atiku’s camp, who are also seeking to seize her properties.

“I fear for my safety and that of my kids. His Excellency’s security operatives, especially Ibro and others, have made threats and called my relatives, friends and staff and searched for my assets to seize and monitor my phone calls and those of friends and relatives.

“For that reason, I have exited my law firm and sold all my assets and moved abroad until peace reigns. I have done nothing wrong except to ask for a divorce and it pains me that I have to use this medium to address thorny issues but fear that at this point, I would have to put my side of the story on record. It is obvious that a campaign of calumny to total discredit and put me in bad light has begun”, Jennifer was quoted as saying.

Jennifer debunked claims that she left her marriage because her husband married another wife.

“That His Excellency married a new wife was never the cause of our problem as many have said. His Excellency is a Moslem and I have never questioned him about his wives or intended,” she said.

“The core reason for the divorce was disagreement over my continued stay in the United Kingdom, to look after my children and several other long-standing issues. I needed to play the role of a mother at this time to the children who have gone through the absence of both father and mother growing up; especially, with the passage of my elder sister who used to look after them.

“Furthermore, in light of COVID times, choosing to stay with the children was nonnegotiable. And, in line with Northern culture, the new wife takes up the baton so I can also focus on giving the kids more care.

“On June. 26, 2021, I asked His Excellency to grant me a divorce in light of the breakdown of our marriage. And, during that period, I told his Excellency that I remain at his Excellency’s service to continue to assist him in his activities even If I am no longer married to him. Suffice it to say that several friends of his Excellency tried to mediate in this matter. I thank them most graciously and remain grateful for their efforts, Peter Okocha, Senator Ben Obi, Tunde Ayeni, Captain Yahaya and Senator Ben Bruce.”

Commenting on plan to sieze her properties, Jennifer said, “The truth subsists with regard to the Dubai house. I will make no further comments on it because it is the subject of litigation filed by his Excellency against me.

“I need to also put on record that if I wanted to take His Excellency assets, I would not have returned to him his property documents in Abuja and Jos and document, allowed the driver to collect his cars, gave up the house in Asokoro and Yola.

“The last time I was in Nigeria, I called to have the Asokoro and Yola documents delivered to him. It was never picked up and I still state that Excellency is free to send someone to have the documents picked up anytime he deems fit.”

She said despite all that had happened, she was still seeking a quiet divorce, which if it had been granted, would not have caused issues.

“Divorce is never an easy process for both parties. I reiterate that I hope we can settle our issues privately and I would remain at His Excellency’s service should he need my help, anytime,” she added.

Jennifer Iwenjiora Douglas-Abubakar was the fourth wife of Atiku Abubakar. She is an indigene of Onitsha, Anambra State. Before their divorce, there had been speculations that cracks in the relationship between the couple began when the former Vice-President married another wife.

Daily Trust reports that Mrs Douglas-Abubakar relocated to London after her husband brought in a Moroccan wife which she protested against.

Mrs Douglas-Abubakar began her career as an NTA News correspondent in the 1980s but later moved to and became a citizen of the United States, where she studied law in Washington DC. She is a legal practitioner with her private firm in the federal capital territory, Abuja. She has three children for Atiku — Abdulmalik, Zahra and Faisal.