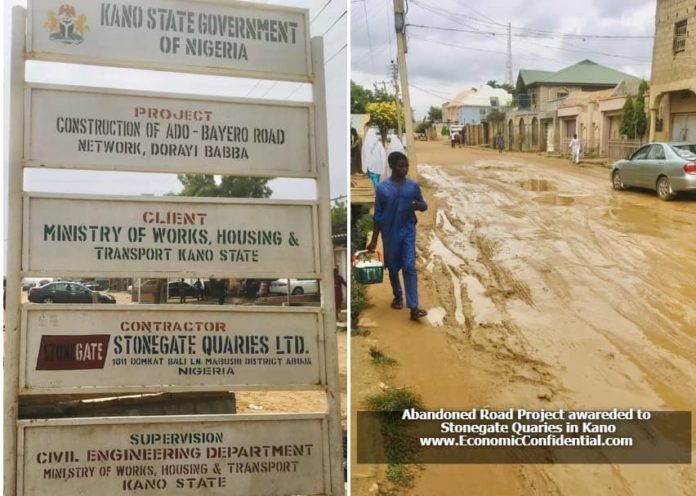 A construction company to which Kano state governor, Abdullahi Ganduje, awarded a road contract in 2019 has been found to be non-existent.

The state government officials have also, after repeated questioning, been unable to account for the total of 110 million Naira that has been approved for the road which remains abandoned and in a state of disrepair.

The Ado Bayero Road Network project at Dorayi Babba in Gwale LGA was first awarded in 2019 by the State Executive Council chaired by Governor Ganduje and a total sum of 110 million Naira has been approved for it across 2019, 2020 and 2021 budgets.

The sum of 38 million Naira was approved for the project in 2019 and other approvals came in subsequent years but according to findings by Economic Confidential, the project has been abandoned with no sign of work going on.

STONEGATE QUARIES LIMITED, the construction company which had the contract awarded in its favour is unlicensed, unregistered and untraceable, ECONOMIC CONFIDENTIAL can authoritatively report.

Based on the measurement of a certified surveyor and testimonies by residents of the community, the abandoned project is just a 1-kilometre road.

STONEGATE QUARIES LTD, whose address was given as 1011 Domkat Bali LN. Mabushi District, Abuja, is the name of the construction company said to have gotten the contract. This is according to the metal board square fixed at the project location that carries details about the project, client, contractor and the supervision of the project.

According to the feedback obtained from the Corporate Affairs Commission (CAC), however, the company does not exist in law as it is not registered.

Efforts by ECONOMIC CONFIDENTIAL investigators to check the online presence of the company also proved abortive as Google’s search of the company’s name and status brought no results.

However, an official status report generated on 31st of March, 2022 from the CAC revealed the existence of another construction company similar to the one in question, but with different names and addresses.

The construction company to which the Kano State Government awarded the road contract to is “STONEGATE QUARIES LTD” situated at 1011 Domkat Bali LN. Mabushi District, Abuja while the company found on the CAC website with a similar but different detail is an inactive company named “STONEGATE ENGINEERING AND QUARIES LTD” situated at No. 5, Gana Street, Maitama, Abuja, FCT.

Despite the approval of 110 million Naira since 2019, it was gathered, through a community forum, that the residents of the area have in recent years raised more than 14 million naira and spent on the road just to make it a bit passable for themselves.

The ECONOMIC CONFIDENTIAL team that visited the road observed a lot of potholes, sinkholes, uneven surfaces and the shredded condition of the road as well as the lack of a drainage system. Residents also complained that the road has been in that condition for the past 14 years. Aside from making commuting difficult, the residents also lamented the fact that small and medium scale businesses find it difficult to cope during the rainy season due to the terrible condition of the road.

A community leader, Alhaji Usman Aliyu, who has lived at Ado Bayero Road for over 15 years, said members of the community have tried through several means to get the Kano State Government to flag off the construction of the road project but all efforts have proved unsuccessful.

“For over 14 years we have been contributing money to maintain this road, and every year we spend at least 1 million naira just to maintain the road. Sometimes we do it twice or thrice a year, depending on the amount of money we gather from these good members of the community.

“In 2019, there was an attempt to commence the construction of Ado Bayero Road, and we were told that the Government had approved and released funds because we saw heavy trucks camped at the site for about two weeks before they eventually disappeared. Ever since we have no idea what happened and we still do not know why the project has not taken off yet. But the metal square board of the project is still at the site” he added.

Usman also noted that Ado Bayero road is a network that connects to several itineraries, schools and one of the biggest mosques in the city, the Dan Sarari Mosque. He further explained how residents with lung-related diseases suffer a lot from inhaling toxic dust as a result of the abandoned project.

Small business owners operating along the Ado Bayero Road also told ECONOMIC CONFIDENTIAL how their businesses have been affected in terms of the inability to move their goods easily and having to pay more for transportation.

A business owner simply identified as Ambassador Abdulyasar Aminu said the abandonment of the road project not only hinders individuals’ business prosperity but also affects the economic growth and sustainability of the state.

“To cut it short, last year BBC reporters visited this area to report about the flooding we experience yearly during the rainy season which obviously cannot be unconnected with the abandonment of this road project as well as lack of drainage system.

“We are calling on the Government to do the needful as our households are flooded during the rainy season, while our businesses suffer from abrupt shortage of customers due to the dust entering the shops, stalls and homes of residents around this axis.”

Another resident and business owner, Mahdi Bashir, expressed the fear that with the abandonment of this road project, the Ado Bayero community might turn into another urban slum.

“We are part of the urban settlement yet we are like a slum area due to a lack of drainage system and roads that will make life easier and make business operations run smoothly. We have a great layout, structure and settlement but unfortunately, we are set back by this abandoned road project.”

Bashir further explained that during the rainy season the situation is worse for both business owners and households struggling with floods at homes and outside the streets.  As for the dry season, dust coming from the bad road is a major problem for the residents.

Commissioner for Works Challenges Reporter: “What is your problem with that?”

In an attempt to balance this report, Economic Confidential reached out to the Kano State Commissioner for Works, Engr. Idris Wada Saleh, after repeated calls and text messages finally asked our reporter to mention the name of the road and the contractor to enable him to find out whether it is a federal constituency, state, local government or an individual’s project.

After the reporter furnished him with the details of the project, his response was: “Who told you he is not qualified and what is your problem with that? Is the work not done properly or he doesn’t pay his taxes.”