‘It Is Not Enough,’ Nigerians React To Buhari’s Gift To Kaduna Taxi Driver 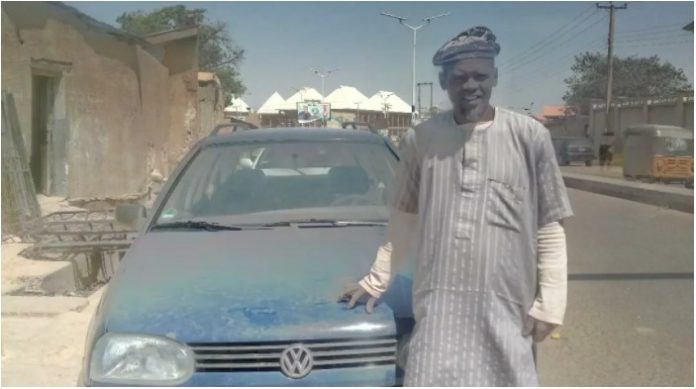 Barely 15 days after President Muhammadu Buhari recounted his experience when Umar Isa, a taxi driver in Kaduna saved him after his campaign crew came under attack back in 2014.

In what appeared to be a show of magnanimity eight years after the incident, President Buahri during his recent visit to Kaduna State, alight and traced Mr Isa and offered him an old Golf Modeled Taxi.

The controversial gift came years after fruitless attempts by Mr Isa to see President Buhari. On the advice of his brother, he resorted to using social media hoping to get the attention of the President.

“My brother named Nasiru Aliyu Babanyaya asked me to allow him to record my voice so that he will post it on social media which I eventually agreed.

“Three days after posting the interview I was called to the DSS office and given 10 bags of rice, groundnut oil, palm oil, 10 cartons of pasta and N200,000.

“A few days later, Nasiru called me again that I had some visitors. As soon as I reached home, they presented a car and N700,000 cash to me and said that it was from President Buhari,” he said.

However, reactions have followed the Presidential gift which many described as “Not Timely and Not Enough”.

“It is 8 years after. What if he lost the 2019 elections, what would he say? And look at the car he was giving as President. It is disappointing, even a councillor can give that. Is it not the LG Chairmen usually give millions? No, no, is not enough”. A taxi driver Adamu Abdullahi Dass LG of Bauchi state noted.

Musa Kasimu a resident of Tafawa Balewa Bauchi and an ardent supporter of the President said the gift provocative.

“Most people don’t know how the driver sacrificed his life for our President until recent. Our political rivals are now laughing at us. And they have reason to laugh. I think this driver has in God’s will contributed in altering a monumental tragedy nearly happened to the nation – it is not enough,” he maintained.