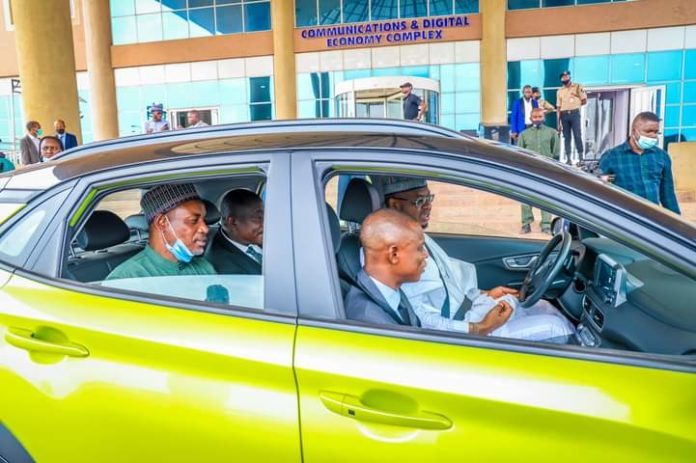 The National Automative Design and Development Council NADDC has presented a gas-powered vehicle locally designed in Nigerian to the Federal Government.

The Director-General of the NADDC Jelani Aliyu disclosed this during a working visit to the Minister of Communications and Digital Economy, Professor Isa Ali Ibrahim Pantami in Abuja.

In a Press Statement signed by the Spokesperson to the Minister, Uwa Suleiman, Jelani Aliyu, in his detailed presentation to the Minister, disclosed that the automative industry with the right support was capable of producing four hundred thousand vehicles annually.

At the visit, various models of locally manufactured, tech-driven, battery and gas-powered vehicle were presented to the Minister.

He called on Nigeria’s digital economy sector for support and partnership in its efforts to develop and sustain the automotive industry in Nigeria.

Mr. Aliyu commended the federal government’s efforts in restoring the industry to its lost glory and boosting indigenous production through the institution of the National Automotive Industry Development Plan (NAIDP).

“The NAIDP has five elements which include; Investment promotion, infrastructural development, improvement of standards, skills development and market development. We believe that building a partnership with the digital economy sector based on these initiatives will engender the need for support for the industry to thrive. The vehicles manufactured and assembled in Nigeria are very tech-driven and it is only natural to seek your support as the driver of the digital economy in the country”.

He emphasised that the resuscitation of the Nigerian automative industry will create jobs, encourage innovation and build indigenous capacity among others.

In his response, Professor Pantami commended the Director-General for exhibiting skillful leadership, conveyed his sector’s willingness to partner with the industry.

He reiterated his advocacy for skills over mere paper qualifications citing Jelani Aliyu as an excellent example of the value of proven skills.

“We are more than willing to collaborate with the industry and it is exciting to note that your presentation is in alignment with at least four of the pillars of the National Digital Economy Policy and Strategy (NDEPS), particularly in the area of software development and digital design. The sector has an important role to play in supporting your parastatal so that we will jointly create many more jobs for our citizens and support our economy”.

The Minister remarked that one of the major challenges facing the nation is the importation and this cannot be sustained.

“We must therefore heed Mr President’s call to produce what we consume and consume what we produce. We also need to create awareness among the populace to take pride in our indigenous products and patronise them”