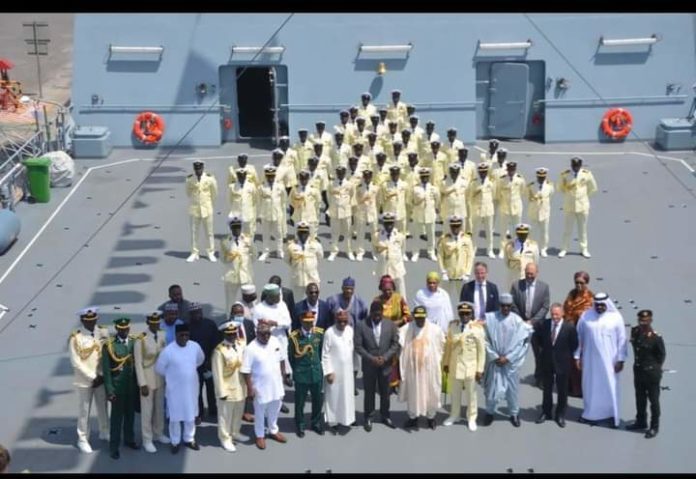 The Federal Government has acquired a new landing ship for the Nigerian Navy to boost security in the nation’s coastal waters as well as to enhance the power projection capabilities of the Navy.

Bashir Salihi Magashi, the Minister of Defence Major General while taking over the new ship in a colorful change of flag ceremony held in Sharjah, Dubai said the acquisition of the landing ship Tank 100 NNS KADA was to replace the two Navy ships including NNS AMBE and NNS OFIOM decommissioned 10 years ago.

“The induction of NNS KADA into the Nigerian Navy fleet will not only enhance the security of Nigerian Maritime environment but will serve as a force multiplier in the projection of naval power capabilities for enhanced security in the Sub Region”. the Minister pointed out.

General Magashi added that NNS KADA would also play a vital role in Maritime crisis management by conveying relief materials in areas facing humanitarian crises within West Africa and beyond.

He thanked President Muhammadu Buhari for his commitment to the recapitalization of the Nigerian Navy fleet to remain combat-ready and alive to its constitutional responsibility.

The Minister urged the Commanding Officer and the Ship Company to “consider yourselves as privileged to be in charge of the magnificent new ship built by one of the best shipyards in West Asia”.

Chief of Naval Staff Vice Admiral Awwal Gambo in a welcome address described the home-bound voyage of NNS KADA as a milestone achievement in the Federal Government’s effort to sustain the development of its economy.

A statement by the Nigerian Navy indicates that NNS KADA ship’s journey to Nigeria would include ports visits to Oman, Kenya, South Africa, Angola, Gabon and is expected to finally arrive Nigeria on May 27th, 2022.