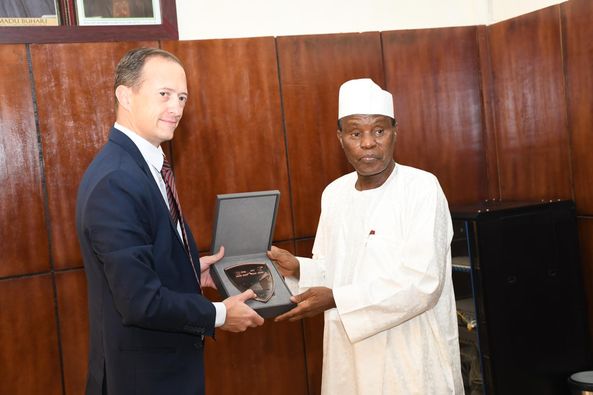 Major General Bashir Salihi Magashi, the Minister of Defence, has today restated the commitment of Nigeria to sourcing Military equipment from Manufacturers with Best Practices and genuineness.

General Magashi stated this today Tuesday when he received the Edge Group Corporation specializing in the production of Military Hardware and training of Personnel on advanced Defence Doctrine who paid a courtesy visit to Ship House, Abuja.

The Minister recalled that he was earlier in Dubai (UAE) on an official visit and was opportuned to visit the factory site of the Edge Group, adding that what he saw was impressive.

He assured Edge Group that the Ministry would explore areas of collaboration, especially in the transfer of technology and intelligence gathering methods.

The chairman of the Edge Group Corporation, Mr. Miles Chambers in his remark informed the Minister that Edge Group specializes in the design and production of platforms, systems, Military, hardware, intelligence gathering, mission support and personnel training.

Mr. Chambers noted that the company was established in 2019 in Abu-Dhabi under the United Arab Emirates (UAE), Defence Industry.  Presently, the Group is in collaboration with twenty-five different companies.