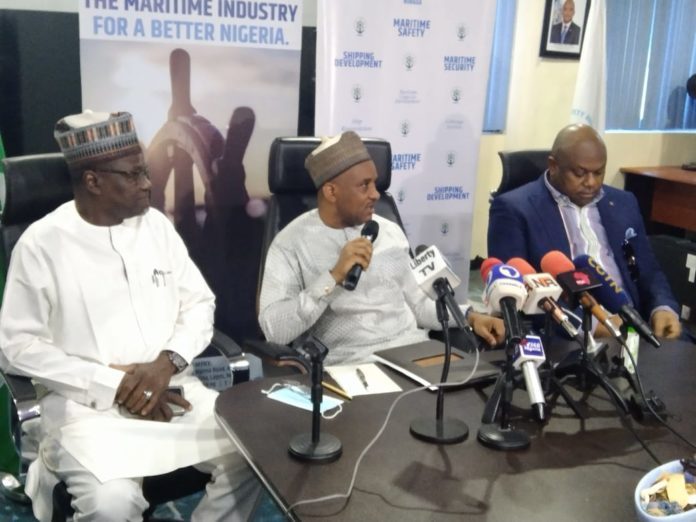 The NIMASA Director-General Bashir Jamoh told journalists at a briefing in Lagos on Friday that the N37.69 contribution was higher than N31.83 billion contributed by the agency in 2020.

Jamoh said NIMASA was striving to strengthen its security mechanism, while enhancing revenue collection process to the Federal Government.

He said the N50bn floating dock being built would be operational before the end of the first quarter of 2022, noting that the facility would, however, be subjected to a privatisation process to help lessen the cost burden.

“We expect before the end of the first quarter the floating dock to be operational. Our floating dock is owned by NIMASA and we handed it over to a public-private partnership. The issue of privatisation is not a product but a process.

“The DG of the Infrastructure Concession Regulatory Commission (ICRC) was here to give us the first certificate, telling us that privatising the modular floating dock is profitable. We have gone ahead to do negotiations with the Managing Partner, the Nigerian Ports Authority. We expect that by the middle of February, we would get the final no-objection certificate,” he said.

The NIMASA DG stressed that the privatisation of the floating dock must be approved by the Federal Executive Council (FEC) because it was a national asset. He added that the agency suffered a lot of challenges when work began on it, but the cost could not be borne by the Federal Government alone.

“When it is privatised, the managing partners can decide and move it to the proper position it should be. Operationality of the floating dock would be taken over by foreigners to service it before the approval of the FEC. By the time we receive approval and the floating dock is in use, we will move it to where it belongs,” he added.

A floating dry dock is one of the five types of dry docks used for ship repairs. It is a submersible platform that is specifically designed and used to repair vessels.

The multi-million dollar modular floating dock acquired by NIMASA since June 11, 2018, has been lying idle in Lagos, with the cost of maintenance estimated at about $30,000 daily.

The floating dock, which was conceptualised and acquired by the Dakuku Peterside-led administration, was expected to serve as a maintenance base for visiting vessels and those domiciled in the country, with the intention to save about $100 million yearly in capital flight, generate employment and boost local capacity.

Speaking on the involvement of the European Union in the safeguarding of the Gulf of Guinea, Jamoh said the agency had to make the collaboration since Nigeria’s integrity was at stake.

“Whatever happens in the Gulf of Guinea affects Nigeria. Our integrity is strained and nobody respects us. Sometimes, they see us as part of the criminals. We took it upon ourselves to have a meeting called the Joint Industry Working Group. It was from this we got the shared Gulf of Guinea where international communities contributed to lessening insecurity in the Gulf of Guinea.

“We cannot sit down and watch Nigerians being accused anyhow. That’s how the European Union came to the Gulf of Guinea. They consist of Denmark, France, Italy, Britain, United States (US) and even the Danish. The Gulf of Guinea is large and we allowed them in. In a bid to address this issue, we experienced the issue with the Danish Frigate. That’s why the issue was there,” he explained.

He noted that there were lots of errors on the rules of engagement of the foreign navies in the Gulf of Guinea.

The frigate, which was deployed off West Africa in October, intervened in an alleged attack on a commercial vessel in November, killing four pirates and taking four other suspects on board the frigate, according to Reuters. Three of them suspected to be Nigerians were freed by the authorities in the country.

The fourth, who was injured and had his leg amputated, appeared in court in Copenhagen, where he was charged with the attempted manslaughter of Danish soldiers. He could not be released due to his condition, though he pleaded not guilty to the manslaughter charge.

He disclosed that wreck removal had reached an advanced stage from Badagry to Tin Can Island.