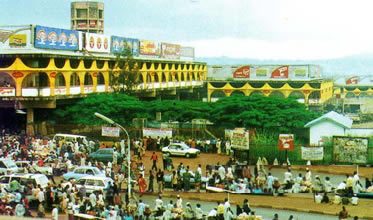 The Plateau State Government has approved the reconstruction of the Jos Main Market burnt down two decades ago.

The approval was sequel to a memo submitted by the state Commissioner for Urban Development Idris Gambo, who is supervising the Ministry of Commerce and Industry to the State Council meeting with the proposal for a Public-Private Partnership Joint Venture to be funded by Jaiz Bank Nigeria Plc.

In a statement by Dr. Makut Simon Macham, Director of Press and Public Affairs to the Governor of Plateau State, said the decision was reached by the State Executive Council at its weekly meeting presided over virtually by Governor Simon Lalong.

Commissioner for Information and Communication Dan Manjang, when briefing newsmen after the council meeting, said the reconstruction of the Jos Main Market has been one of the priorities of the Lalong Rescue Administration.

He explained that the determination and resilience of Governor Lalong to fulfill his campaign promise to the people by ensuring that the market is reconstructed has finally paid off with the agreement by Jaiz Bank Plc. to partner with the Plateau State Government in funding the project, stating that the project is expected to be completed within the lifetime of Lalong administration

The entire project will be funded by the Jaiz bank with a total of 4,231 shops of different sizes expected to be constructed on 44 percent of the land totaling 7.4 hectares, while the rest of the land space will provide for parking, banks, fire station, police station, administrative blocks, and other facilities, according to Idris Gambo, the Supervising Commissioner for Commerce and Industry.

Gambo also stated that the Exco resolved that those who were displaced from the burnt market will be given the first option of acquiring the new shops which will be provided under a flexible payment plan to ensure that genuine traders and people of Plateau State are not left out.

The estimated total cost for the construction of the three phases of the market is 9.4 billion naira.