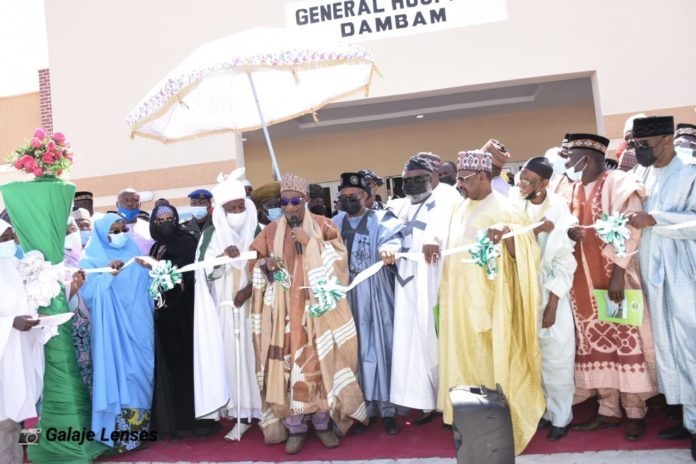 Senator Walid Jibrin, Chairman Board of Trustees of People Democratic Party, PDP, has commissioned the constructed Dambam General Hospital worth over N300,000,000 on Wednesday.

Putting the hospital to use in Dambam, the headquarters of Dambam local government area of Bauchi State, the BoT Chairman said Bala Mohammed is replicating the good job he did during his time as FCT Minister.

He said if properly managed, the Dambam General Hospital will not only be a place where sick people are treated but also a place that can serve as midwives hatching ground.

Governor Bala Abdulkadir Mohammed said an emergency was declared on the health sector to put to order the bastardised health infrastructures of the state.

He said the constructed hospital which is an expansion of the initial structure of Dambam General Hospital, has ten housing units for medical staff to create an enabling environment for them to discharge their services to the people with quality assurance.

The governor said the hospital will serve not only the people of Dambam but also people from neighbouring Yobe State as well as those passing through Kano to Maiduguri expressway.

Governor Bala said that on coming on board in 2019, he inherited 50 doctors serving over six million people state.

He, however, said 100 medical doctors to fill the gap of short supply of human resources in the healthcare sector of the state.

Governor Bala said his administration has in its two and a half years lived up to the expectations of the citizens of the state in line with the creeds of the PDP.

Chairman, Board of Trustees of PDP, Senator Walid Jibirin said the track records of Bala Abdulkadir Mohammed during his time as FCT minister cannot be matched by anyone anytime soon.

Bauchi State Commissioner For Health, Sama’ila Dahuwa said Governor Bala Abdulkadir Mohammed is able to within two and a half years turn the misfortune of the health sector he inherited from his predecessor for an improved healthcare service delivery to the people of the state.

He warned the people in charge of managing the hospital to not allow unscrupulous people to vandalise the facilities assembled at the hospital for the public good.