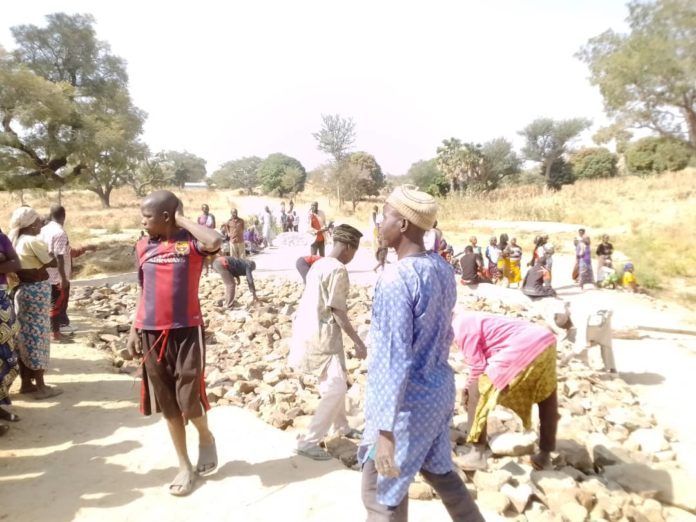 In this 21st century Nigeria, it is hard to believe that communities that have thousands of people are finding it difficult to transport their farm produce, access various health facilities, schools and major markets among others due to poor road networks.

This pathetic situation depicts the true situation and conditions of Dazara community in Bogoro local government area of Bauchi state.

Dazara community has over six different communities under it which includes; Dinki, Dazara(mundu), Dokbi, Unguwan Rimi, Guh, Murai and Vung with Gyara in some instances, with thousands of people as residents of these communities.

Their major challenge aside from the lack of Basic social amenities in the areas is the poor road network which is no doubt hampering economic activities in the communities.

Being a rocky area, the road linking these seven communities started from Dinki along the Tafawa Balewa, Dawaki to Kabir expressway and all year round the people have been persistently facing difficulty accessing their communities.

The only major culverts constructed along Dinki Dultsu and Dokbi by the former speaker house of representatives Yakubu Dogara who is the member representing Dass Tafawa Balewa and Bogoro federal constituency in the National Assembly under his constituency project and other fillings was completely washed away during last year’s (2021) rainy season, a situation that further deteriorates the sufferings of the people of Dazara community.

They were however left with no option but to organise a community project where they came together through the communal effort with support from well-spirited individuals amongst them and the Bogoro local government council chairman Mr Iliya Habila who donated at the time fifteen bags of cement and the member representing Bogoro constituency in the Bauchi state House of Assembly Hon. Musa Wakili Nakwada was also given some cash support just to create an alternative access road as an interim measure before probably major intervention may come.

The Dazara community’s dream of getting major intervention from either the state or federal government is still hanging in the balance as the two to three major collapsed or total washed away culverts in Dinki Dultsu and Dokbi areas remained to unfix up to date despite repeated appeals from the relevant authorities.

These communities are now left with no option but to again solicit for financial assistance from their sons and daughters with a ranking military officer from that axis contributing some amount of money to recommence the temporary construction of the culverts on the major rivers just to enable thousands of people residing along that axis sees the light of the day.

The fear however is that the communal efforts of Dazara sons and daughters may be in vain once there is no strong or major intervention from the government for the construction of major culverts on the affected rivers, as the temporary refixing of the culverts may also be washed away during the rainy season since it can not contain the volume of water coming from the mountainous areas which usually overflood the rivers.

While the communal efforts of the people of Dazara community and those that are contributing towards ensuring that our people come out of what many can call “the jungle ” I appeal to governments at all levels (Bauchi state government in particular) our representatives at the local, state and federal levels to assist the Dazara community by addressing one of their major challenges which are “poor road network “.

Previous article2023 Polls: All Candidates Must Declare Bank Assets, Says INEC
Next articleFears In Kwara Over Influx Of Bandits From Zamfara.