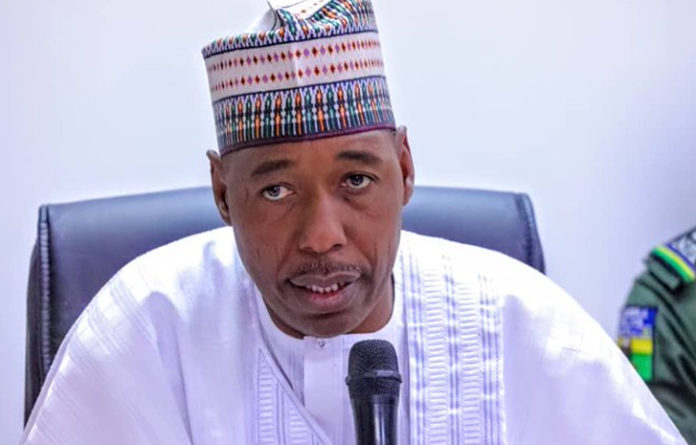 Babagana Zulum, governor of Borno, has commiserated with the military over the death of some officers and soldiers killed in the state, TheCable reports.

Dzarma Zirkusu, a brigadier-general and commander of the army 28 task force brigade, and three other soldiers were killed in an ambush by the Islamic State of West Africa Province (ISWAP) on Saturday.

The commander was said to be on his way to the town for reinforcement when he ran into an ambush.

Babagana, in a statement issued by Isa Gusau, his spokesperson, said Borno is grateful for the sacrifices of the troops.

He said while the government will continue to provide support, there is a need to redouble efforts.

“Today’s unfortunate incident in Askira-Uba local government area reminds us that while our military, other armed forces, volunteers and all stakeholders make combined severe efforts towards peace-building; while many insurgents surrender their arms to tow the path of peace and while reclaimed communities witness the return of peace and access to livelihoods, some insurgents are hell-bent on ensuring we do not fully regain peace,” he said.Advertisement

“The goal of these categories of insurgents should challenge us to remain focused and ceaselessly commit ourselves to supporting our troops in many ways, particularly with logistics on the part of Government, and with credible information and prayers on the part of all of us as people of Borno State. We must always affirm our fates in our armed forces, while the armed forces must remain up and doing.

“We must always recognize what we already know, that insurgents are always plotting with the elements of surprise. Our troops must redouble efforts to be ahead of insurgents. I salute our troops for the resistance put up today. I salute troops who mobilized to provide reinforcement. I salute the sacrifices of some officers and men we lost today and share the grieves of the immediate families and the Nigerian military.

“We thank these fallen heroes for their supreme sacrifices to the Nigerian Nation. The people of Borno will remain forever grateful to them and all fallen heroes and will remain fully supported of gallant troops currently operating in front lines.”

Meanwhile, President Muhammadu Buhari also expressed sadness over the demise of the commander and his soldiers.

The president, who expressed his feelings in a statement issued by Garba Shehu, his media aide on Saturday, said that the soldiers lost their lives in a very rare display of gallantry as they tried to help their compatriots against terrorists.

“Nigeria has lost brave soldiers. I salute their courage. May their souls Rest In Peace. Gen. Zirkusu leaves us sad and devastated. The soldier in him will remain immortal,” he said.

Previous articleObaseki: I Won’t Leave PDP For Another Party — No Matter The Pressure
Next articleHow To Apply For CBN’s N5bn ‘100 For 100 Loan’