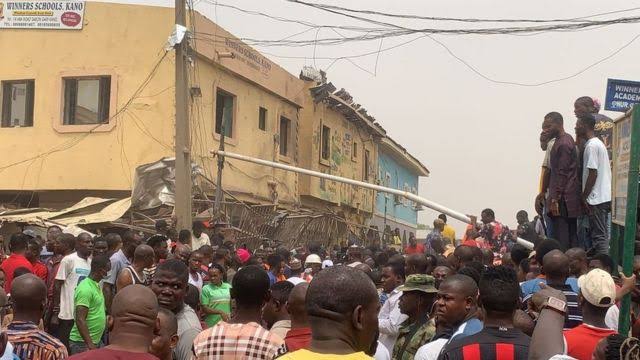 At least three people have been confirmed dead at the scene of a Tuesday morning explosion that rocked Winners Schools, a private primary school located in Sabongari area along Abba Road, Kano State.

WikiTimes learned that the deceased persons were part of the four victims evacuated from the wreckage of the building engulfed by the blast. Their identities at press time, however, remain sketchy.

Volunteers who joined officials of the National Emergency Management Agency (NEMA) in rescuing the situation, said more victims could be saved if equipped with enough tools. According to HumAngle, the responders were using small hammers.

While NEMA officials were present, it was learned that their tools had not arrived.

Meanwhile, the police authority in the state said the incident was a gas explosion and not a bomb blast as widely reported.

Sama’ila Dikko, the Kano State Commissioner of Police said the detonation was caused by a gas cylinder.

However, explosions recorded in the previous weeks in Taraba, Yobe and Kogi States were all attributed to gas explosions, according to statements by the police. But terror groups like Islamic State West Africa Province would later claim responsibility for the explosions.

Previous articleUnderstanding one of Boko Haram’s major ‘powerbases’: The Timbuktu Triangle
Next articleBlack Marketeers Take Over As Fuel Stations Shut Amid Scarcity In Bauchi