Why We Went To Court – Hassan Sherif 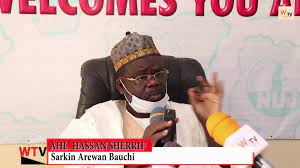 Hassan Muhammad Sharif, a Chieftain of the All Progressives Congress, APC in Bauchi has said they resorted to going to court to save the face of the party in the state ahead of the 2023 general elections.

Sherif said this while speaking to Albarka Radio on Monday.

He said that as a dedicated member of the APC, a party that came with the change mantra, cannot fold his arm to see the party in Bauchi State edging into comatose as it did three years ago in Zamfara State, where all candidates of the party were disqualified for the 2019 general elections.

”We took legal action to save APC from repeating what Zamfara did,” he said.

Sherif expressed confidence over the court process despite the matter being referred to Bauchi State Chief Judge, Justice Rabi Talatu Umar after the defendants in the case filed a petition against the presiding judge.

“He referred the case to Bauchi state Chief Judge to assign a judge who will handle the case. When things are corrected, we are ready to withdraw the case”.

Sharif alleged that there was no consensus in Bauchi state, stressing that no candidate was presented, hence no congress conducted in the state during the last conducted APC state congresses in the state.