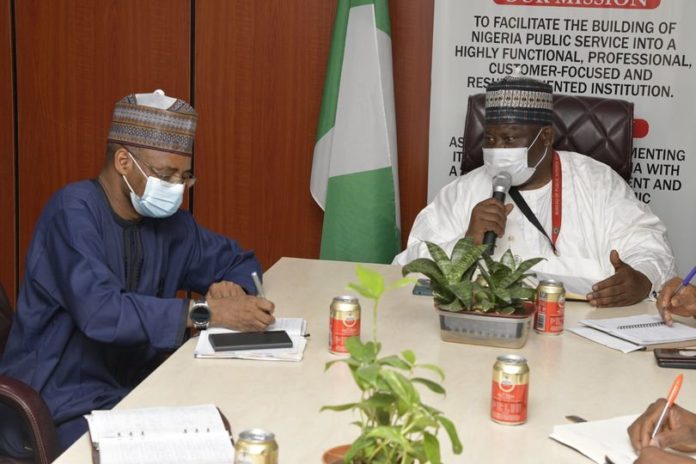 He made the request when he led a delegation of NIMC management staff on a visit to Mr. Dasuki Ibrahim Arabi, the Director-General of Bureau of Public Service Reform BPSR in his office, Abuja.

Azeez said their visit was to thank Arabi and his team at the Bureau, for facilitating the adoption of NIN in the Joint Admission and Matriculation Board (JAMB’s) Unified Tertiary Matriculation Exam (UTME) and also the Nigerian Immigration’s International Passport, seeking their support to mandate it in government services as well.

He noted that the number of Nigerians who have enrolled for their NIN has risen to 75 million, from a mere seven (7) million in 2015.

Engr. Azeez, further revealed that their agency has developed the NIMC mobile App, with which members of the general public can access vital information about their NIN enrolment and print out.

In his remark, Arabi, lauded the NIMC Director-General for the work he is doing to actualize the corporate mandate of the Commission and to also facilitate the enrolment of millions of Nigerians into its citizens’ database.

He called on other management staff of NIMC to lend their support to Engr. Azeez, whom he said has remained steadfast and committed to actualizing the visions and missions of the Commission.

Arabi, assured that BPSR is ready to deploy its Self-Assessment Tool (SAT) program on NIMC, with a view to identifying the areas of weakness and challenges facing the Commission.