In 2011, Lanle Travel & Tour, a private company, milked millions of naira from some intended pilgrims in Niger State, with the promise of airlifting them to the Holy Land, Saudi Arabia. For unclear reasons, they were not airlifted after spending weeks in Shiroro Hotel and Hajj Camp in Minna, the capital of Niger State. In this report, WikkiTimes’ Yunusa Umar documented their plights and how they were doubly victimised.

Hajara Hassan was among the victims who were swindled eleven years ago. She recalled how she paid an agent, Nda Usman, but only got a customised wrapper to deepen her hope that she would be airlifted to the holy land. Surprisingly to her, the agent told her there was no slot again.

“There were many of us that paid,” she told WikkiTimes. “But none of us was taken to Makkah.”

When the agent came to Mokwa to take Hajara to the Hajj camp in Minna, she was excited, but this did not last long because she only wasted her days in the camp.

“He suddenly came one day that I should prepare for a trip to Minna and took my passport photograph,” Hajara said. “After that, he told me he would be going to Abuja to submit my documents. Upon his return, he gave me a wrapper and nothing apart from that.”

Hajara explained that she and other intended pilgrims waited for days, sleeping in the camp, before they were told to return home. “But they told us to document our payment evidence before we left that day.”

“I arrived Mokwa with nothing,” Hajara said as tears streamed down her cheeks. “Thanks to my neighbours that helped me in surviving the hurdles.”

Stunningly, Hajara’s slot was given to another person, she claimed.

“I never knew he had sold my slot until one of my sisters, who was an intending pilgrim heard my name at the airport in Abuja, but saw another person answering,” Hajara claimed. “Then, I was still stranded at Minna airport.”

“After a while, Usman told me he had refunded my money to Lanle Travel & Tour company. He said I will be going with the company in the coming year,” Hajara added. “But that did not happen. Instead, I was scammed again.”

Two years ago, an agent of Lanle Travel & Tour company, Nda Chiji “fraudulently” collected N10,000 from Hajara and other intending pilgrims that he had scammed earlier. The N10,000, according to Hajara was to help them retrieve the huge amount of money lost to the company.

“That time, I had no money on me. I had to borrow. There were people who pleaded with him to deduct it from their Hajj money, but he refused,” she said.

Mohammed Ndace Isah (now late), one of the victims of the Hajj scam, also lost N740,000 to Chiji. But when the latter asked people to pay N10,000 to retrieve their money, Isah’s son, Kudu, paid accordingly.

“My late father paid N740,000 to Nda Chiji, ” Kudu told WikkiTimes. “When they returned after spending weeks in Shiroro hotel and Hajj camp in Minna, my father was frustrated and sickness caught him. He later died.”

“A sum of N140,000 was contributed to Chiji,” Kudu claimed, adding that the agent promised to retrieve their money in two weeks.

A father of five, Mohammed Jiya Emijiyaga, was among the 2011 victims. The aged man was not interested in narrating his experience with Chiji.

“2011 was a tragic year for a few intended pilgrims, particularly those who missed their slots,” he said, adding he was able to visit the holy land later in 2018. “My children raised the money for me to perform my Hajj in 2018.” 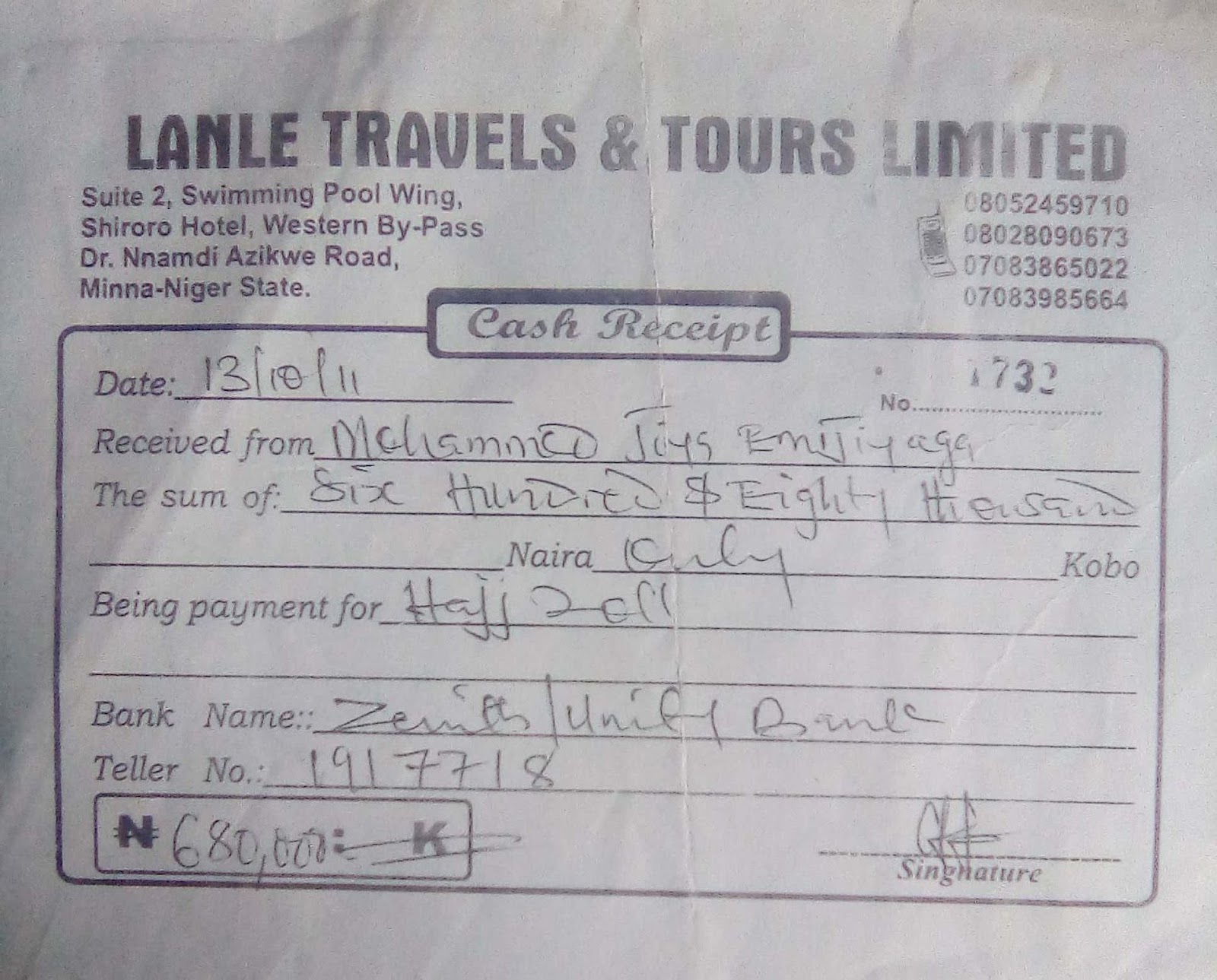 He said the company after defaulting in 2011 promised to airlift him the following year. “But they failed to do so. Some people even lost their lives during the process,” he said, referencing Kudu’s father. “Ya Ndace passed on without performing one the Islam’s obligations which he paid for.”

Adamu told WikkiTimes that he and his wife paid N750,0000 separately to Chiji, but could not make it to the holy land. He added that there were four other people from Bukka village swindled by the agent.

“We spent weeks in Shiroro hotel and Hajj camp before they later sent us back home,” Adamu said. “They took us to Hajj camp, but we saw nothing like a plane to airlift us.”

“Anytime I asked him, he would tell me they were still processing it.” However, some of the aggrieved people have taken the matter to a court in Minna, WikkiTimes learnt.

When our reporter visited Chiji, he declined to comment on the allegations leveled against him.

“I can not share details of the circumstances surrounding the issues,” he told WikkiTimes, adding he would not share information without the consent of others involved in the case.

When this reporter attempted to question him further, he responded: “Wait! The case is still pending in court and it will continue soon.”

He, however, said that the National Pilgrims Commission had instructed them to come with Lanle’s board of trustees to discuss the issues. “Though our two lawyers, Barrister Shehu and Mohammed, were consulted,” he said, claiming that the commission endorsed the letter.

At press time, the Director of Lanle Travel & Tour Company Limited, Alhaji Ndagba Lanle (as identified by Truecaller), has not responded to enquiries sent to him.

This publication is produced with support from the Wole Soyinka Centre for Investigative Journalism (WSCIJ) under the Collaborative Media Engagement for Development Inclusivity and Accountability Project (CMEDIA) funded by the MacArthur Foundation.