Gov Bala Says Wike Better Qualified Than Him For Presidency 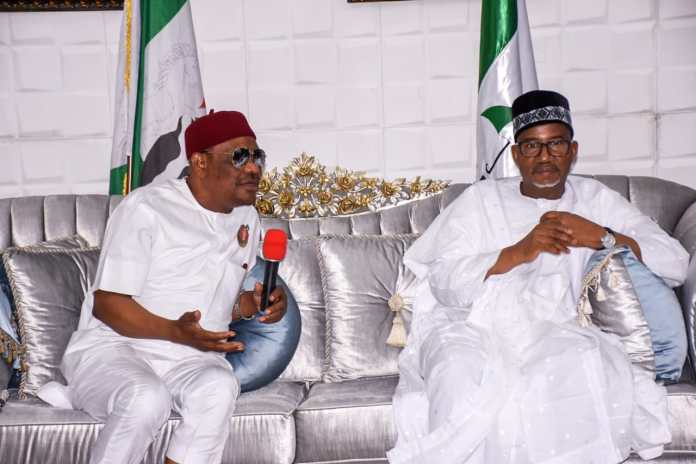 Governor Bala Abdulkadir Mohammed of Bauchi State, said though he had disclosed his intention to run for the presidency, the Rivers State Governor, Nyesom Wike, is better qualified than him in terms of accomplishing goals.

Speaking at the flagging-off of Rumukwurushi-Elimgbu flyover in Obio/Akpor Council of Rivers State on Monday, Gov Bala said, “On behalf of everybody here, I want to say thank you to you because I wish you’ll be given the opportunity to bring this type of vision to the national level where you will be able to contribute your quota.”

Gov. Bala stressed that if the people of Rivers State were lucky to have Wike, Nigerians would be luckier to have Wike’s skill to harness resources towards improving the quality of life of the Nigerians.

He said, “Again, you can see the fidelity and the sincerity of purpose. I am not in my second term but I cannot remember any second term governor doing this kind of infrastructure, delivering to his people.

“When some second term governors are busy preparing to go home, this man is even breaking new frontiers, doing new projects and giving timelines and finances that will be able to be delivered during his tenure.”

Gov Bala said Wike demonstrated good leadership in Rivers State, making it more attractive and a thing of pride to be associated with the Rivers State Governor.

“We are copying from him because we don’t have to reinvent the wheel. He has done so much. He says the truth and does the right thing. You can see the conceptualisation. The way and manner the projects were conceptualised and financed.”

Speaking, Governor Wike said his administration owes it as a duty to Rivers people to deliver social services and quality projects that will improve their living conditions.

He explained that the Rumukwurushi-Elimgbu Flyover is the 10th flyover and a part of his administration’s promise to the people.

WikkiTimes recalled that Governor had on January 1 visited Gov Bala and said Bala has the capacity and leadership potential to rebuild and unite Nigeria.

Previous articleFG Committed To Optimal Operations Of Onigbolo Cement And Save Sugar Companies
Next articleNYSC: Gombe Intervenes As ATBU Fails To Mobilise 59 Students