No Country Can Develop Without Contributions Of Its Scientists – Osinbajo 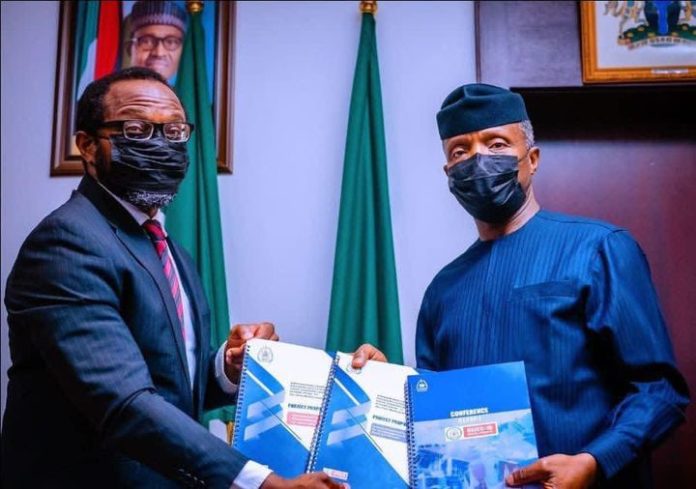 Vice President Yemi Osinbajo has stated that there no country in the world can attain meaningful development without the contributions of its scientists.

Osinbajo stated this when he received a delegation of the National Institute for Pharmaceutical Research and Development (NIPRD), a parastatal under the Federal Ministry of Health at the Presidential Villa, Abuja.

The NIRPD delegation, which was led by its Director-General/CEO, Dr. Obi Peter Adigwe, made a short presentation to the Vice President on its projects which focused on three thematic areas: uterine fibroids, prostate issues and men’s health, and sickle cell disorder.

“I’m truly proud of what is going on in NIPRD; the sheer amount of serious work that is coming out of there. And I am pleased that at least we are taking our scientists seriously. I don’t believe that there is any country in the world that can really appear to be doing well, not to talk of doing well, if they don’t take their scientists seriously.

“It is very evident that we must do something more serious about our scientists; and we must continue to ensure that they provide the leadership in terms of innovation, medical research, engineering and all of the various other areas that are important to our development.”

The Vice President further observed that it is becoming increasingly important to provide requisite incentives to encourage and reward local scientists.

“Here in Nigeria, obviously, we need a bit more in terms of being able to manage and reward talents so that people remain and then are able to do the work,” he said.

The DG of NIPRD, Dr. Obi Adigwe, in his remarks, thanked the President Muhammadu Buhari administration for its continued support and commended the VP for championing the progress and development of the Institute, noting that the VP’s remark at the Institute’s conference in October 2021 was a major inspiration behind their ongoing projects.

He added that the global recognition the Institute had garnered in recent years, as well as the milestones it has achieved so far, “is a demonstration of what can be done when we get the right political support to underpin what we do as scientists.”

While acknowledging the impact of the Buhari administration on turning things around at the Institute, he said, “prior to this administration’s interest in the Institute, we had suffered decades of neglect. But with its interventions, we have now received over 100 new equipment. This now means that the Institute has emerged as one of the reference points in various thematic areas in Africa for the analysis that we do.”