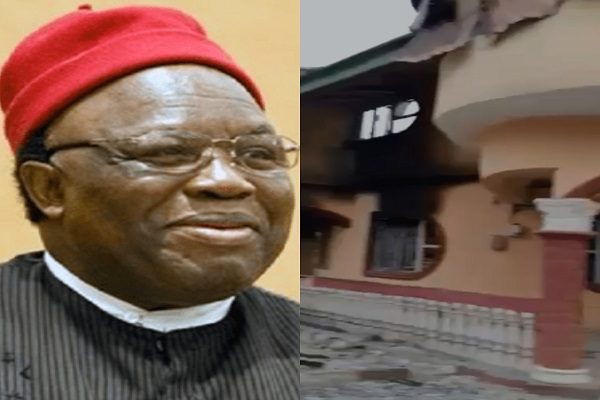 An eyewitness told newsmen that the assassins drove into the Obiozor’s compound around 06:10 am Saturday, shooting sporadically before they set the house ablaze. He said that the CCTV cameras captured the attackers.

He noted that they used explosives devices and petrol to put fire in the house where most parts of it were burnt and properties burnt to ashes.

Reports also indicated that the roofs of the buildings were blown off and scattered around the compound. It is gathered that Professor Obiozor was not at home when the attack was carried out.

The Imo State Police Public Relations Officer, PPRO, Micheal Abattam, confirmed the attack, saying that “There was an attack on the house of the President General of Ohanaeze Ndigbo, Professor George Obiozor, in Awo- Omamma of Imo State early this morning, but no life was lost.”

The attack is coming barely two months after Prof Obiozor, berated the pronouncement by the Indigenous People of Biafra (IPOB) that it has banned the consumption of ‘Fulani beef’ in the Southeast region, stating that though IPOB’s anger was based on the injustice against Igbos over the years, that still does not give them mandate to speak for the entire people of the South-East.

You can also recall that IPOB had in January 2021 declared that it will not recognise Chief George Obiozor as President- General of Ohanaeze Ndigbo, claiming he was imposed on Ndigbo.