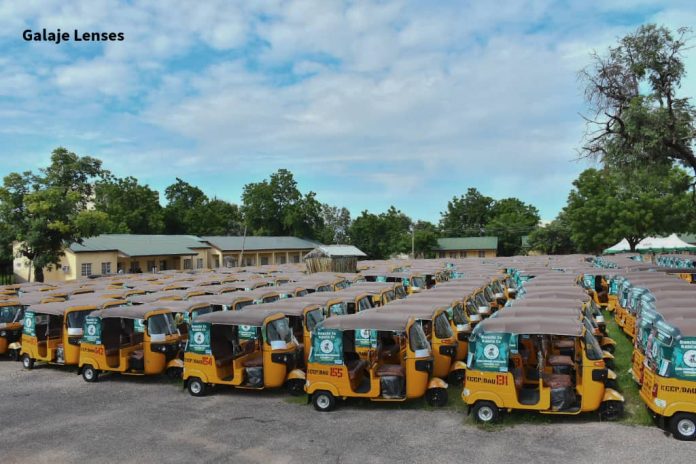 The strike action embarked upon by tricycle riders popularly known as ‘Adaidaita Sahu or Keke Napep’  in Kano on Monday has resulted to a huge loss of revenue for the state, the riders as well as business owners running into millions of Naira.

Daily Trust reports that this is the second time in less than 12 months the riders will be downing their tools with adverse effects on the state’s economy and the welfare of its residents.

It is estimated that Monday’s strike action cost the state government of at least N6million in internally generated from the N100 per day tax levied on the officially documented 60,000 Keke riders in the state, while the riders themselves are estimated to have lost an average of N300,000,000 as a sample of Keke riders spoken to by Daily Trust said they make between N5,000 and N7,000 on daily basis.

It was gathered that the riders are protesting against the registration fee charged by the Kano Road Traffic Agency (KAROTA).

The chairman of the tricycle operators association, Sani Sa’idu Dankoli said the central issue revolves around the operating permit and the price, which he said the government initially put at N20,000 per rider.

“When we intervened and rejected, they now reduced it to N8,000. Still, with that, we seek reduction which even resulted in almost being at loggerhead with the Managing Director of KAROTA because we said it’s too much.

“The government itself has commended our effort of paying our daily levies. Even for that, we deserve to be listened to.

He said they are in talks with their members to review the action as the majority of them do not have the means to feed their families except when they go out every day.

He said Kano has an estimated number of tricycles totaling around 70,000 statewide.

But the Public Relations Officer of KAROTA, Nabulisi Kofar Na’isa put the official figure of  commercial tricycles in the state at 60,000 based on daily remittance.

He put the number of the riders that have already renewed their permits at 10,000, which means the state is still expecting to generate at least N400million from the at least 50,000 (N8,000 per tricycle) of already captured tricycle while new registrants are expected to pay N18,000 each.

The KAROTA MD, Baffa Babba Danagundi earlier told Daily Trust that the riders do not respect the law and do not want to pay revenue to the coffers of the state government, hence the current impasse.

“The government is already on the verge of bringing out an alternative because the government feels it has allowed a monopoly on the transport system in the state now,” he said.

Speaking with Daily Trust, a Keke rider, Muhammad Lawan Ishaq said he has renewed his permit but has lost between N6,000 to N7,000 in just one day of the strike action.

He added that the fear of getting attacked by unpatriotic colleagues, has kept him in one place recording idleness and irrecoverable loss.

As most of the commercial tricycles in the state are operated on a “hire-purchase” system, the riders are expected to remit between N2,000 and N2,500 to the buyers of tricycles, which means that these owners have also recorded losses in millions of Naira.

Adamu Hamza, a businessman at Kwari Market in Kano, said due to the absence of tricycles many businessmen were unable to go to market and open their shops, which also means businesses that are not related to transport also suffered huge losses in millions of Naira due to the strike action.

“Costumers were scarce and everyone who was able to come to the market closed earlier than the normal working hours.

“Equally, you hardly see food vendors. No food today at the market,”he pointed.

The strike action by the Keke riders coincided with the resumption date for primary and secondary schools in Kano, resulting in many students’ absences while others were seen roaming the streets and hoping to hitch a ride to their schools.

Residents, who were also heading out to their businesses and workplaces were also left stranded by the industrial action by the Keke riders.

The riders, who kicked against this, refused to convey residents to their destinations on Monday.

From the early hours of Monday, mini trucks and private motorcycles were seen on major roads in the state and were converted to alternative means of transportation.

Abubakar Isah, a father of five, who lamented his children’s unavoidable absence in school because the Keke rider he hired to be taking his children to school cannot do that, he said he has no means other means transport to take them, thereby, the children has to be absent and stay at home while he also stayed behind without going to work.