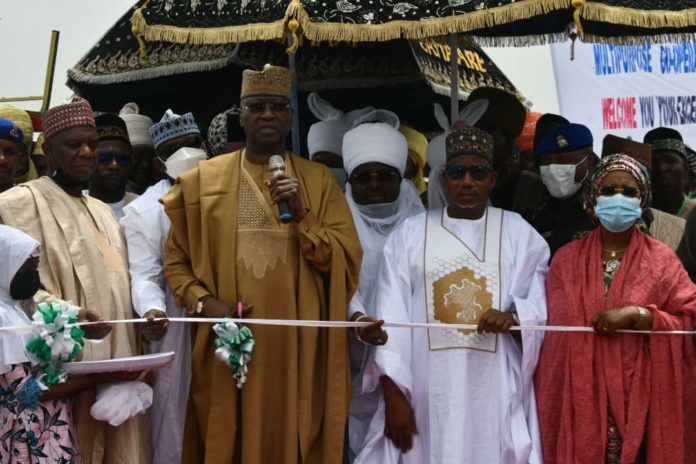 The project is a joint project implemented by the World Bank and the Bauchi State Government.

Performing the official commissioning of the project at the Gubi Dam Water Treatment Plant, the president said his administration attached great priority to the provision of water to Nigerian communities to safeguard their health.

Read: How Bauchi APC Chairman Died After Series of Threats

The President who was represented by the Secretary to the Government of Federation Boss Mustapha said over the past few years, the Federal Government gave more primacy to upgrading the infrastructure base of the country to harness development and improve the living condition of the people of the country.

President Buhari said the health and water sectors received greater attention from his administration out of his appreciation that they are crucial and critical at guaranteeing and safeguarding the health of Nigerians.The president affirmed that his decision to declare a state of emergency in the water and sanitation sector is gradually yielding positive results to the glee of Nigerians.

He commended Governor Bala Mohammed for his unwavering dedication and commitment to providing infrastructure to the good people of Bauchi State.

In his speech, Bachi State Governor Bala Mohammed Abdulkadir said the decayed infrastructures he inherited upon assumption of office gave a source of worry, hence his resolve to lift the people of Bauchi State out of the wood.

He commended the President for several Federal Government projects domiciled in Bachi State which gave the state a sense of belonging in the community of states in Nigeria.

The Governor commended the World Bank for the project and the understanding it exhibited during the course of the implementation of the project.

“In our avowed determination to ensure continuity and dynamism in governance, we flagged off the various construction activities under the Project, which hitherto had been dormant due to lack of political will. Another issue that we had to contend with was the lull in the execution of the Project due to the late commencement of the procurement process and the eventual impact of COVID-19 which all negatively impacted the World Bank timelines on the project.

“The World Bank gave an extension of six (6) months at the first instance and later gave additional three (3) months. This made it possible to complete the project which is being commissioned today,” he said.

The project which was started in 2019, has the capacity to fend for the water needs of the residents of the Bauchi metropolis for the next 20 years.

The project saw the rehabilitation of Gubi Dam and its appurtenances, expansion of the Gubi Dam Water Treatment Plant from its former capacity of 45million litres to 75million litres; the replacement of the 800-millimetre diameter old and leaking steel material pumping mains with 1000 millimetre diameter ductile iron pipe from Gubi Dam to Warinje and Buzaye Reservoirs; the construction of 7 million litres capacity Concrete Reservoir on Buzaye Hill and rehabilitation of the 2 x 11 million litres concrete reservoir on Warinje Hills; the replacement and extension of 210 km of pipelines within the city centre and new layout and installation of meters; the procurement and 10,000 domestic among others. meters bulk installation for sustainability.