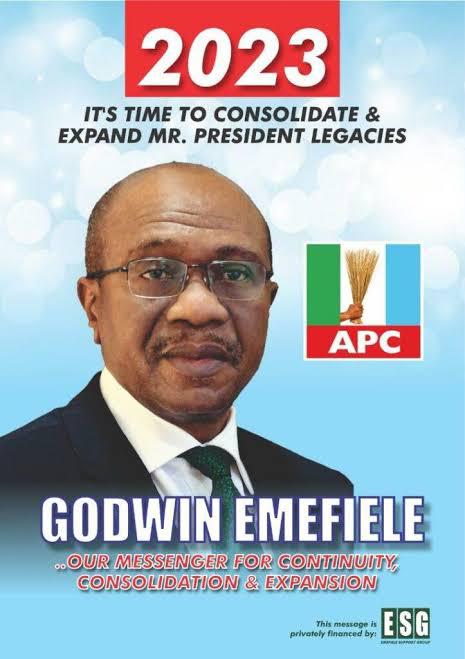 Bauchi based Civil Society Groups, Organisation for African Children Development and Human Rights Protection, have filed a lawsuit against the Governor of the Central Bank of Nigeria CBN, Godwin Emifiele at a Federal High Court Sitting in Bauchi.

The suit filed by the NGOs accused Emefiele of breaching the Central Bank of Nigeria CBN Act by involving in politics while holding the seat of the Governor of Nigeria’s apex bank.

The NGOs argued that pro – Emefiele political groups since last month swung into action by holding political rallies calling on Mr Emefiele to contest for the Presidential seat under the platform of the ruling All Progressive Congress APC in 2023.

WikkiTimes reports that two days ago, the presidential campaign posters of Emefiele flooded Damaturu, the Yobe State capital tying the CBN governor and Mai Mala Buni as President and Vice Presidential aspirants.
The posters with various inscriptions such as “A CALL TO SERVE; Emefiele & Mai Mala Buni 2023”  were mounted at strategic locations in Yobe State.
Mr Emefiele was yet to distance himself from the campaign posters.

In suit number FHC/BAU/CS/17/2022, obtained by WikkiTimes, the plaintiff asked the Court to restrain Dr Emefiele from involving himself in any political campaign as long as he holds his seat in the bank.

Section 9 of the Act provides that the Governor of the CBN and his Deputy shall devote the whole of their time to the service of the Bank.
The section argued that while holding office, the CBN Governor shall not engage in any full or part-time employment or vocation whether remunerated or not except for such personal or charitable causes as may be determined by the Board and which do not conflict with or detract from their full-time duties.
The suit prayed that “within 30 days after service of this sermon on them, inclusive of the day of such service cause an appearance to be entered to this sermon which is issued upon the application of the plaintiff c/o its solicitors.
However, Dr Emefiele did not officially declare his intention to contest for the seat, but his posters continue to flood many state capitals just as youth groups continue to canvass support for him to be president.