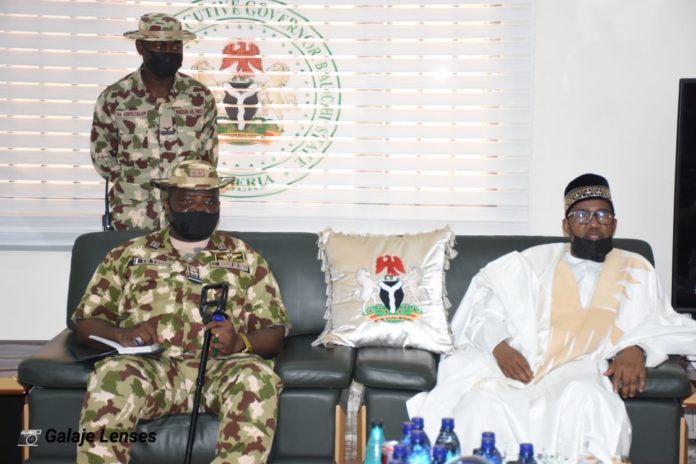 The Forest which stretched between Toro and Ningi local government areas of Bauchi State is about 205,900ha bordering Kano, Kaduna and Jigawa States.

He said intelligent security details made available to him from the local areas indicated that a helicopter jet used to fly over the Forest, a development that raised concern about the safety of the people living around the Forest.

Governor Bala said with this trend, it is more pressing for the officers and men of the Nigerian Air Force to intensify air surveillance around the forest to forestall breach in public safety and security of lives and property of the especially the local populations bordering the large Forest reserve and entire citizens of the state in general.

The governor assured of the Bauchi State Government’s readiness to provide all the necessary support towards consolidation of the prevailing peace in the state.

He, therefore, called on the personnel of the Nigerian Air force to intensify surveillance in the area with a view to identifying the suspected helicopter to guarantee the safety of lives and properties.

Bala Mohammed had on Saturday 5th February 2022, said the spate of kidnappings and other forms of insecurity in Toro local government, one of the local areas bordering the Lame-Burra Forest Reserve, defy all possible solutions deployed to defeat criminals and criminalities in the area.

He said people from some states of the troubled Northwest and Northcentral managed their ways into the Forest thereby wreaking havoc on Toro, Dass, Tafawabalewa and Alkaleri local governments of the state.

“Yes we have paid attention to the issue of security because security in Bauchi is key and Toro local government is the place that is most disturbed by insecurity, not because of the geographical location of the area or because Toro people are criminals or they are harbouring criminals but because of the movement of criminals from the Northwest, from the Northcentral and even within the Northeast.

“So, it is an incubation centre. People moving into Toro going to Tafawabalewa. Dass and Alkaleri. That is the movement.

“It is the only local government that is always defying solutions but we are doing more and we are going to do more.

“Of course we have people coming to settle in the Lame Forest, I am calling on the local councils and the traditional rulers to open their eyes; to shine their eyes. We are not unwelcoming people coming or strangers but we don’t welcome criminals into our state.

“We don’t have to be selling the forest. The Lame-Burra is one of the largest in Nigeria but it is almost destroyed. Certainly, as a government, we are taking very stringent measures to make sure that this thing does not continue,” Bala said.

Previous articleHanifa’s Murder: When A teacher Becomes Cheater
Next articleHold Buhari Responsible If We Embark On Another Strike – ASUU