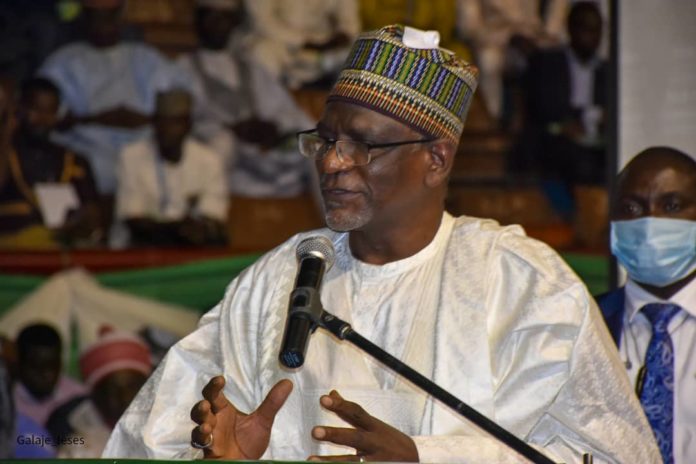 Malam Adamu Adamu, the current Minister of Education, could be the missing piece of Bauchi APC’s puzzle on who to put forward as the party’s flag bearer for the 2023 election.

Right from the first republic, Bauchi state proved to be a political arena where top-notch gladiators reigned. The unrivalled political sagacity of its people emanates from the inherent blood of Malam Sa’adu Zungur and Sir Abubakar Tafawa Balewa that runs into their veins.

The uniqueness of the political arithmetic that has been applied to its cumbersome geopolitical distribution and ethnoreligious divide says a lot about how Bauchi was able to produce the first and only prime minister of the federation, and many other national stakeholders afterwards. This will not allow the APC the liberty to field just any candidate.

Regardless of the bittersweet relationship that lingers between these zones, political positions are shared based on some sort of gentleman’s agreement in which Bauchi South has been getting the upper hand since the return of democracy in 1999, fielding about four executive governors that have governed the state for more than two decades.

It’s only understandable that justice demands a power shift to the other zones come 2023. This prompted numerous aspirants from both the Central and the Northern parts of the state to start the process of wrestling power back to their zones under the auspices of the All Progressives Congress.

Even though political permutations are at their early stage in Bauchi State, one couldn’t be totally wrong to suggest that the APC has skewed toward picking a gubernatorial candidate from Bauchi North, where there are about five political powerhouses showing strong interest in taking over the Ramat House. This would have been a good omen for the party, albeit consistent political squabbles that are taking place amongst these aspirants. Almost all of them are at each other’s throats for some personal aggrandizement.

Truth be told, you cannot strike a consensus between Ambassador Tuggar and Captain Bala or Dr Babayo and Hon. Farouk. When you explore the option of voting, none of them will ever support the candidature of whoever emerges victorious; some may seek legal redress and some will opt for anti-party to stir up the pond, so nobody gets the fish at the end.

The duo of AVM Sadique and DCG Babani that seem to be neutral are newbies with no significant stake whatsoever in the party structure. Fielding any of them, although they are capable means dropping the earlier mentioned veterans who may take offence and likely drop out of or remain within and sabotage the party’s efforts.

It will require a magic wand to keep these heavyweights in one fold and convince them to rally around a particular candidate among themselves, regardless of their resources, capacity, connections, or track record. This brought us to the question of “who the cap fits?”

Before suggesting any answers, lest we forget that the primary objective of Bauchi APC, like any other political party, is to win elections, control resources, and govern society in its own style. To do that, the party needs to place a consolidating candidate that will receive the blessings of most of the stakeholders, including those aspiring for the gubernatorial seat. Here comes Malam Adamu Adamu, a man who has systematically reshuffled and controlled the Bauchi State APC. He also has the new party chair and many other critical stakeholders at his disposal, among whom are three aspirants whose commands are his wishes.

Although, it was advised not to underestimate the ego of ambitious politicians, if their current exhibition of loyalty is anything to count on, Captain Bala, Dr Babayo and Hon. Farouk will automatically give way to Malam’s candidature. He only needs to say the word, I believe they will withdraw their aspiration and support him wholeheartedly to the end. If APC is desirous of unseating PDP’s Bala in 2023, they must not overlook this very important permutation that will keep the party intact and give it electoral victory at the polls.

With M.A Abubakar likely out of the way and the desire to shift power elsewhere, Bauchi APC should persuade Malam Adamu for the collective interest of all to bear the party’s flag for the forthcoming 2023 election even if he didn’t show interest. Speaking of which, words in the street suggest that Malam has informed Mai-mala Buni of his desire to contest for the Bauchi State gubernatorial election. If this is true, the APC should rally behind Malam Adamu and begin planning for the task ahead in order to save the party from further political squabbles.

Analytically, with the support of the likes of Capt. Bala, Dr Babayo, Rt. Hon. Dogora, Hon. Farouk, and many other critical stakeholders across the state, the 2023 election will be a walk in the park for APC and Malam Adamu Adamu, thereby giving Katagum the most covetous seat of Bauchi State Governor.