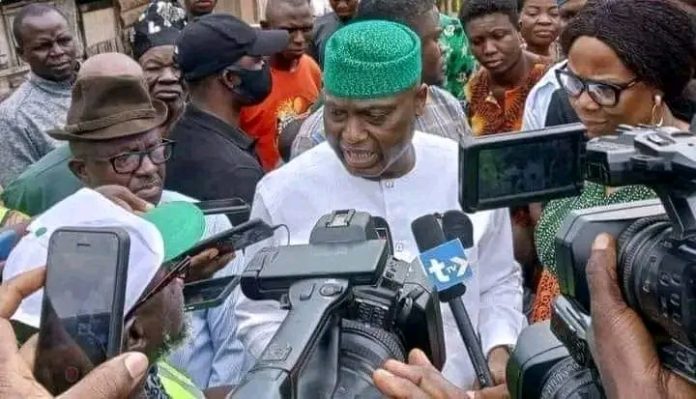 Prof. Oyebode Adebowale, the Commission’s returning officer who doubled as the Vice-Chancellor of the University of Ibadan, when declaring the winner of the election, stated that  Oyebanji polled a total of 187, 057 to defeat the Social Democratic Party (SDP) candidate, Segun Oni, who scored 82, 211, to come second.

“That Biodun Oyebanji, the candidate of APC, having satisfied the requirements of the law, is hereby declared the winner and returned,” he declared.

According to him,  the Peoples Democratic Party (PDP) candidate, Chief Bisi Kolawole came third with 67,457 votes.

WikkiTimes gathered that the supporters of the APC in Ado Ekiti had early this morning staged a jubilation scene when the results of Saturday’s governorship election showed that the candidate of the party, Biodun Oyebanji, trounced the 15 other candidates that partook in the exercise.

However, Saturday’s polls in the state were characterized by alleged voter inducement and bribery as some of the suspects caught with money allegedly used for vote-buying were paraded at the Oke Ori Omi Divisional Headquarters of the Police Force.

READ: Why Picking Dogara As Tinubu’s Running Mate Will Be ‘A Very Big Liability’ To APC—Salisu Shehu

Saturday’s election in Ekiti State is the first poll conducted by INEC after the Electoral act 2022 came into law, which many political analysts see as a ‘make or mar’ trial of the forthcoming 2023 general election in terms of credibility.

INEC had earlier stated that the Ekiti State polls would be the most credible exercise ever conducted.