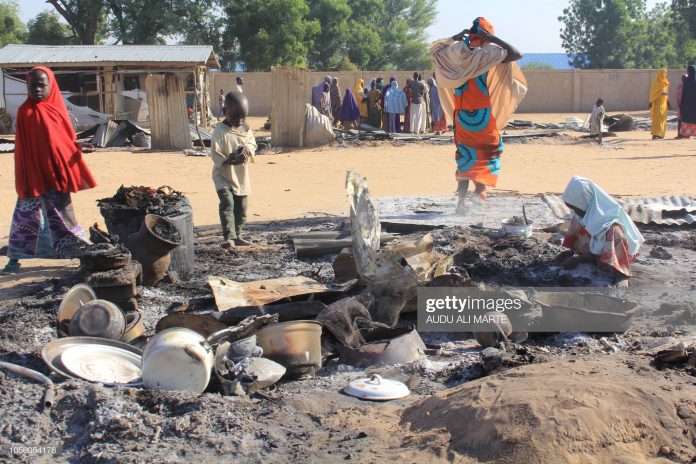 Suspected members of Boko Haram have killed 32 youths at deserted Mudu of Dikwa local government of Borno State while buying used and worn-out metals and iron.

Babagana Umara Zulum, the state governor in a statement yesterday refuted media reports that 60 “farmers” were killed by the Boko Haram insurgents in Mudu, Rann.

The Statement further discredited reports suggesting that the youth were farmers, arguing that the slain youths were enterprising young men working to make a living out of metal hawking.

“From the lawmaker’s briefing, a total of 32 youths is believed to have been killed by the insurgents. The youths were not farmers but highly-enterprising young men engaged in gathering metals popularly called ‘Kayan Ajaokuta,’ which are sold as raw materials for steel production,” the statement read in part.

The youths who despite knowing that the deserted Mudu village in Dikwa Local Government Area, which is 45 kilometres away from Rann in Kala-Balge was fled by residents still braved the risk of getting into the fate that hitherto befell them.

However, they were ambushed by the insurgents, about 32 amongst them were reportedly killed and six persons were injured during the ambush while two escaped unhurt with the state government claiming to have recovered only 14 bodies from the area where the attack was carried out.

Reports earlier in circulation had it that the victims were farmers as residents told newsmen that: “The Boko Haram terrorists on motorcycles armed with guns and machetes surrounded their farms and started killing them one by one,” a villager said.

However, the Boko Haram/Islamic State in West Africa Province (ISWAP) terrorists have on many occasions attacked farmers, herders and loggers, claiming that these innocent citizens struggling for survival are spying on their activities considering the proximity of the residents to the insurgents’ hideouts.

They accuse these victims of passing information about their activities to the Nigerian military.

Reports have it that the insurgents have on many occasions raided herding communities, rustling cattle and valuable commodities in the region to fund their operations.

Also, was the deadly invasion of  a rice plantation in Zabarmari, a community in the Jere Local Government Area in 2020 where at least 43 farmers were killed.