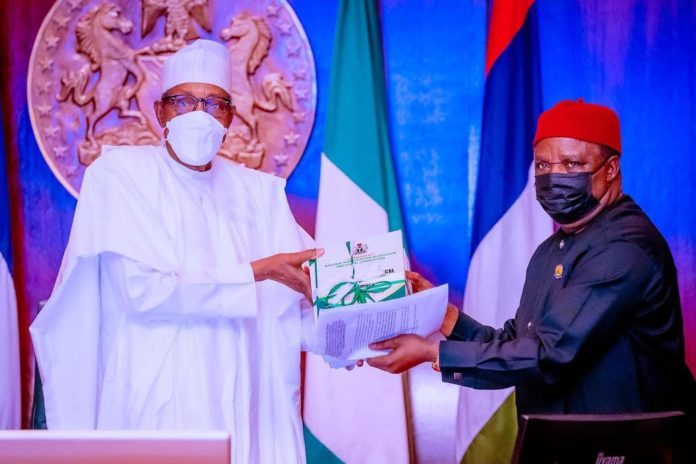 President Muhammadu Buhari has stated that he will await the final outcome of the constitutional review process before presenting the report of the review of the vertical revenue allocation formula to the National Assembly as a Bill for enactment.

The President stated this on Thursday in Abuja while receiving the report by the Revenue Mobilization Allocation and Fiscal Commission (RMAFC), led by Engr. Elias Mbam.

‘‘Ordinarily, I would have gone ahead to table this report before the National Assembly as a Bill for enactment.

‘‘However, since the review of the vertical revenue allocation formula is a function of the roles and responsibilities of the different tiers of government, I will await the final outcome of the constitutional review process, especially as some of the proposed amendments would have a bearing on the recommendations contained herein,’’ he said.

President Buhari listed some of the recommendations in the report as follows:

‘‘Establishing local government as a tier of government and the associated abrogation of the state/local government account; moving airports; fingerprints, identification and criminal records from the exclusive legislative list to the concurrent legislative list, empowering the RMAFC to enforce compliance with remittance of accruals into and disbursement of revenue from the Federation Account as well as streamlining the procedure for reviewing the revenue allocation formula.’’

The President assured members of the Commission that the Federal Government would immediately subject the report to its internal review and approval processes, while awaiting finalization of the efforts by the National Assembly.

He added that ‘‘I want to let you all know that I have keenly followed most of the discussions held in the geo-political consultative process and one thing that struck me clearly was the agreement that a review of our vertical revenue formula cannot and should not be an emotional or sentimental discussion and it cannot be done arbitrarily.

‘‘All over the world, revenue and resource allocation have always been a function of the level of responsibilities attached to the different components or tiers of government.

President Buhari, therefore, declared that for the nation to have a lasting review of the present revenue allocation formula, there must first be an agreement on the responsibilities to be carried out by all the tiers of Government.

He recounted that the Federal Government also made its input into the process of reviewing the vertical revenue allocation formula based on existing constitutional provisions for roles and responsibilities for the different tiers of government.

‘‘We must note the increasing visibility in Sub-national level responsibilities due to weaknesses at that level, for example: Primary Health Care; Basic Primary Education; Levels of insecurity, and; Increased remittances to State and Local Governments through the Value Added Tax sharing formula, where the

In his remarks, the Secretary to the Government of the Federation, Boss Mustapha, said the RMAFC followed due process in undertaking the exercise, and sought the opinion of the Federal Government before finalizing the report.

Giving a synopsis of the report, Mustapha said that it was in four volumes, including a summary in the main report.

‘‘Volume 1 contains the various memoranda submitted by the Federal and State Governments as well as the FCT. Volume 2 details the presentation from the academia, civil society, professional bodies, traditional rulers, individuals, as well as women and youth council.

‘‘To complete the inclusiveness of the stakeholder participatory processes adopted, Volume 3 is a research that captures the body of knowledge that supported the review while Volume 4 is a further distillation of submissions by the State and Local Governments as well as NGOs and Area Councils of the FCT,’’ he said.