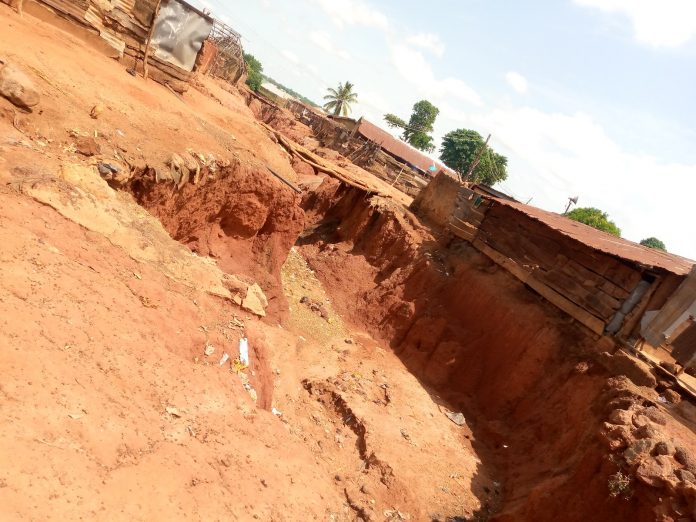 For decades, residents of Ya’ Afu and Efu Abebe, the suburbs of Mokwa community in Niger State have suffered perennial flooding resulting from an expanding erosion passing through the areas, and with more rain in the coming days, more houses are likely to be swept away.

What the residents lost to the flood-ridden erosion surges every year, WikkiTimes learnt. Abdullahi Nagogo Mohammed, a resident reveals that his community had cried for help on several occasions, but the best is yet to happen.

“This dredge has rendered many residents homeless while some houses are on the verge of collapsing,” Mohammed told WikkiTimes. “We have been battling with this erosion for not less than 15 years and it keeps expanding after every rainfall.”

Mohammed explains that residents of the areas always “sleep with their eyes open”, especially during rainy days.

“Though, Senator representing Niger south, Muhammad Bima Enagi started construction of the project but later stopped,” said Mohammed. “But the situation is getting worse, rendering residents of the areas homeless”.

Another resident, Mohammed Abdullahi, believes the authorities turned deaf ears to their cries.  “We had sought help severally, but it yielded no positive outcome.”

Abdullahi decries the abject loss of properties to the ravaging flood. “We cry everyday over the loss of properties,” he said, pointing to a mosque that is at the edge of extinction. “This mosque was passable before, now flood keeps creeping to its doorstep.”

Cloudy weather alone sends a dangerous signal to the local dwellers. “When others pray for rain, we dare not even though we are farmers,” Abdullahi mumbled.

Apart from the damages, WikkiTimes gathered that the flooding had claimed two lives in the previous year.

Abudllahi recalls the time when a World Bank emissary visited the spot, filmed the area and went ahead to interact with the community’s leaders. “But the situation is still not friendly.”

He corroborated Mohammed’s account, saying “Senator Bima’s project was started from Baptist school but stopped and has not continued.”