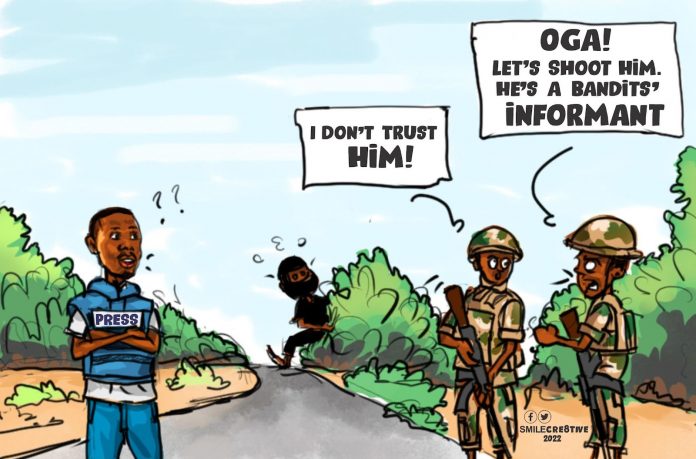 Telling this story could have been through the eyes of a bullet-pierced skin, as I turn a year older today. Yet, the life-threatening memory of December 17, 2020, still lingers.

Although the two-series investigation was solely done for HumAngle, Nigeria’s digital platform with a focus on security-related matters. Two years later, telling the behind-the-scenes story through WikkiTimes, yet another digital investigative platform, is imperative.

On this day, my loved ones would have been celebrating my birthday posthumously, if the irate soldiers had hit the trigger.

I had mapped my journey to banditry hotspots (Kokki, Magami, Sarkin Zama and Uguwan Magero) In Shiroro and Rafi-Kagara LGAs In Niger State, following a painstaking plan with Bello Kokki, an indigenous fixer from the axis.

“We cannot go by car,” Kokki warned in a phone conversation on a Wednesday evening. “Only motorcycles can ply the monstrous road at the moment.”

READ: REPORTER’S DIARY: Luck Worked For Us — Police On Taraba-Adamawa Highway Say Their ‘Hoodlums’ Are Not Around

“Motorcycles?” I thought aloud in my students’ apartment in Lapai, Niger State,  after hanging up the call. It was a blind risk, but as a campus journalist, I was not too concerned about what the consequences could be. Although, broader experience had availed me of the knowledge of ‘calculative risks.’ I am no longer naive.

A day before, Ibrahim Adeyemi, an investigative conflict reporter, and Yekeen Akinwale, the head of the newsroom at HumAngle had given their professional guides. Their words became to me a replica of the jottings I would study before taking an examination. It was indeed an examination.

I would alight at Kuta, the headquarters of Shiroro on Thursday afternoon, after a three-hour trip from Lapai where I had schooled.

Kokki, my fixer, did not frustrate the journey ahead of us. In a matter of minutes, he picked me up from the park, fueled his motorcycle and the journey began. From townlets to farmlands, deserts and lulled villages.

No bandit attacked us while en route to the villages they governed, unhindered. Perhaps we were lucky.

We soon arrived at Kwatai river bank where thousands of displaced persons had erected makeshift huts for shelter. “This is where many villagers take refuge,” said Kokki.

I was lost in gaze while pondering on how the displaced persons survive in the bushy area.

My fixer was time conscious, he interrupted my thought and ushered me into a canoe carrying his motorcycle along. It was adventurous and interesting to cross the Kaduna-Niger confluence of River Niger.

From Kokki, Magami, Sarkin Zama and Uguwan Magero, the storylines were dotted with bloody tales through the teary eyes of sedentary villagers. It was an agonising experience.

A few hours later, we returned to the Kwatai river bank. According to the displaced persons, the river bank was the only jinx between them and the waylaying terrorists. While villagers could swim and dive canoes, bandits could not. Except with the help of kidnapped victims, which is not too common.

Kokki had to return to Kuta that night and I could not go with him because I had to interact with the displaced persons. So I spent the night there with them.

Gunshots coming from the axis I visited a few hours ago would not allow me to nap even for a few minutes — I stayed awake but not too bothered, despite the gunshots.

“It is normal,” a friend  I had endeared myself with at the river bank told me. “Can’t you see children playing? The gunshots will not get here. It is between local vigilantes and the bandits.”

That very night, I conducted my interview with many families including nursing mothers who feared reptiles could kill their babies.

The horrid flash of violence I had experienced could not make me wait any moment longer the next day. I hurriedly found my way to Kuta town. Now my predicament is in view.

Kokki, not disappointing, again picked me up from a fuel station to the Internally Displaced Persons (IDPs) camp in Kuta Primary School.

Instead of proceeding to the IDPs, we decided to take permission from the military personnel guarding the camp.

“Who are you and where are you from,” asked a dark-skinned soldier clad in mufti.

“I am a journalist.”

“Where you take comot from,” another soldier fully kitted, quarried.

After hearing that I just left the banditry-ridden villages, the soldiers numbering three grilled me further:

“Do you see our men on ground?”

“Are you saying we are not working?”

The last question got no response. This did not sit well with them.

“I don’t trust him,” one of them who I would later learn was their superior, said in Hausa.

Kokki’s impatience (knowingly in my favour) further enraged the soldiers. They wanted us to beg but I proved adamant. Kokki’s stand was more demeaning to them.

In a jiffy, their boss seized my students’ press ID card.

He said: “So you are from Ibrahim Badamasi Babangida (IBB) University? Is it Kasim, your vice-chancellor that sent you to come and sabotage our efforts?”

I was standing in quietude as if I was bereaved. My silence was not helping and I knew it.

“I will call your vice-chancellor, you must be expelled from the school,” he threatened. “You can’t even wait to finish your study before starting all these.”

“In fact, we are locking you up,” he declared.

I told myself, “things have started falling apart.” Immediately, I phoned Akinwale, the HumAngle head of the newsroom, and Ternenge Ende, head of the department, mass communication at IBB University.

“Hello, sir! We have arrested one bandits’ informant here…,” he told the recipient as he walked away from us.

He would later return saying his boss at Minna, the state capital, had ordered that I should be taken to a police station in Kuta. This agreed with what Yekeen had suggested. However, Ternenge was not available at the moment. He later reached out to me.

After the tragic drama, with the intervention of camp officials and Kokki’s rigidity, the reality changed to be: “We are just trying to know your real identity. You can proceed with your interview with the IDPs.”

Read the series here and here.