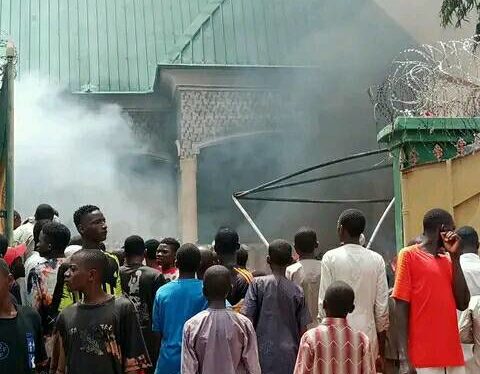 Irate youths have razed Bright Lodge, a students’ residence in Lapai Local Government Area of Niger State, including three shops and a house belonging to a businessman, Emmanuel Ekuagba, as retaliation for the death of Hassan Ibrahim, a 3-year-old boy allegedly killed for ritual purpose.

Sources told WikkiTimes Hassan had been declared missing for some days. His dismembered body, however, was found in possession of one Mubaraq, a gatekeeper in Emmanuel’s house.

According to residents, after killing the boy “and removing some vital parts”, the gatekeeper boarded a commercial motorcycle to a stream where he intended to dump the body.

“The missing parts when the boy was found include his eyes, private parts and fingernails,” Gimba Aliyu, a resident told WikkiTimes.

The gatekeeper could have dumped the body unobserved. “But, the motorcyclist who took him to the stream notified the police after he noticed blood dripping from the sack that Mubaraq was carrying,” Gimba said.

Police mobilised to the stream and apprehended the gatekeeper who at the point of interrogation confessed that he had been contracted by Emmanuel.

WikkiTimes learned that the police later arrested Emmanuel at a shop where he sells building materials.

Vexed by the incident, youths tracked some buildings belonging to Emmanuel and set them on fire.

“His house in Anguwar Hausawa, three shops and a students’ lodge were set ablaze by the youths,” a source (name withheld) told WikkiTimes. “They also set his car on fire.”

Apart from setting his properties ablaze, the youth also looted some valuables ” both in his house and the students’ lodge,” according to the source.

“Some youths made away with students’ mattresses and other things,” the source continued. “Also in Emmanuel’s house, they carted away valuable materials like television, satellite and other things before setting the house on fire.”

Wasiu Abiodun, the Niger State Police Public Relations Officer (PPRO), could not be reached for comments at press time. He did not respond to calls nor respond to a text sent to him.