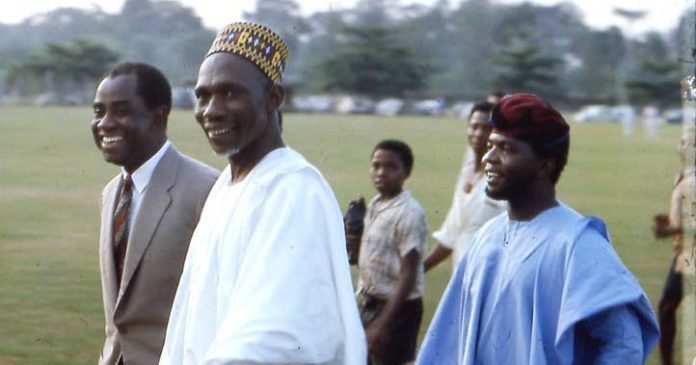 In every country, there exist some few people blessed with outstanding divine favour and qualities in leading the struggle to become a separate entity on the battlefield not forego, wealth accumulation or sentiment but for the mutual benefit of the governed including the yet unborn as a service to humanity.

Nigeria, A breed from the British colonial Masters for years, was one of those countries that witnessed such kind of historical backing by these fallen heroes as people of proven integrity in all spheres of life which put the interest of the people and that of the country above any other thing.

The saying that nothing good comes easy has no doubt proved the testimony of our past leaders who led by example as the servants not leaders to their followers in enduring uncountable number of potholes as well as resisting both internal and external pressure to cross the bridge of slavery, economic exploitation and racial segregation in the hands of the dictators thereby striving hard day in day out towards achieving present-day Nigeria for others to follow and enjoy the path of honour.

Sir. Abubakar Tafawa Balewa, the first and only Nigeria’s Prime Minister who held from Tafawa Balewa Local Government Area in the Southern part of Bauchi State could be seen as the number one citizen, commandant or civilian general at the forefront of the battle without any sophisticated weapons at his disposal but honesty and the zeal at heart as the acumen he possessed in securing the country from the shackles of colonial rule to gain independence.

His Assassination by the enemies of progress on strengthening national cohesion and political jingoists who were the mastermind behind that unforgettable tragedy and unmerciful sin even on the day of judgement should be viewed as a capital offence and abomination for bringing an end to, life of Nigeria’s hero who had danced well according to his tune in building a roadmap to the socio-economic growth of his Fatherland in all aspects of human endeavours during a bloody coup de’tat on 15th January 1966 in Lagos.

On a sad note, permit me to say even if the constitution of the Federal Republic Of Nigeria had clearly spelt out a clause with such kind of brutal killing or massacre as a punishment to any culprit nor a reward to a person that made a total self-submission and surrender for the freedom of this country, I believed courtesy demand people of his calibre to be an exception even in a nation that operates rigid type of constitution but with official privileges, as practised in Nigeria not flexible being a magnanimous leader that laid the foundation of the country’s independence.

I will not be mistaken to say the Author of Eight parts of speech Jennifer Betts has made an under publication for not including additional adjectives that could be used to qualify the nature of sacrifice, devotion and patriotism made by Sir. Abubakar Tafawa Balewa and the likes not only in the country but the entire African continent took into cognisance his good command in oratory while speech-making in the midst of the white men towards achieving a greater unified Nigeria which earned him the name Golden Voice Of Africa.

The scenario equally coincides with the word padding as used by some lawmakers in the Eight National Assembly, raising a topic of discussion that hit the waves of both broadcast and prints media that deals with air time and space respectively as news on daily basis and for a prolong period all over our local and international media outfits. A word that was argued not to even be in the dictionary by alleged tempering with the original budget proposal for a reason best known to them prior to its assent by President Muhammadu Buhari.

Memories of the indefatigable and charismatic man who put two of his hands on the plough to be part of all the processes that led to the birth and groundbreaking ceremony of the country’s independence anniversary as a bride that had tied the knot with many grooms from different ethnicity and swy it from relying on the western powers shall continue to linger not only in the minds of his immediate family members, Northern Nigeria but fellow citizens for his commitment in selfless service to the society.

The Aftermath of his death does not only stop at creating a large vacuum that could hardly be filled in terms of political advancements but had also hampered the rapid economic viability the country was known for as rated on the foreign Markets index in harnessing its abundant natural resources to include cocoa production in the West, palm oil in the East, cotton processing and groundnut pyramid in the North to the lowest ebb per capital.

The date 15th January 1966 would forever be remembered as a sorrowful day in the political history of our dear country for losing a compatriot leader, shrewd politician and ancestor to the freedom fighters with global certification at the end of the road.

Perhaps, he had left to answer the clarion call through an unfortunate means but his virtues coupled with the integrity he exhibited in leaving behind only a muddy house, bed brought by a then-young Minister Shehu Aliyu Shagari; an offer the premier initially turned down until he was away of the country, radio set, small black and white t.v set given by Queen Elizabeth, reading chair, one praying mat, counting bits/rosary, around boot, three caps, three wristwatches and a sword as his personal belongings without a single dime in his account to feed the monarchs on that particular day is an indicator that the Man Tafawa Balewa was pervasively not corrupt and must continue to occupy a big portion in our minds for us to remain one nation one family.

Now, A question that may ignite answers is that, Nigeria was built on the right track by its founding fathers who always think of what they can offer to her instead of what it can offer them as a payback still moving in the same direction just as the railway is the only means of transportation that travels on a single track or gauge line but still maintains its route without deviating or going astray and if NO is the feedback mechanism to my answer WHY, HOW and WHEN did the country change for worse instead of the better and can any concerted effort be geared by the leaders of today as a trial in changing the negative narratives of the story.

As 15th January 2022 marks fifty-six years of mourning your death which is inevitable with the Islamic belief that says KULLU NAFSIN ZA’IKATUL MA’AUT, meaning every soul on earth shall taste death. May Allah comfort you with Janatul Firdaus as a final abode.

Gabi, a Journalist writes from Bauchi and can be reached on:adamumgabi@gmail.com