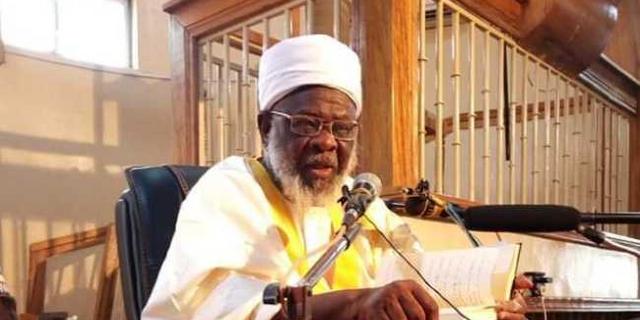 “Verily, Allah does not withhold knowledge by snatching it away from his servants, but rather he withholds knowledge by taking the souls of scholars until no scholar remains and people follow ignorant leaders. When they are asked, they issue judgments without knowledge. Thus, they are astray and lead others astray.”

This week we lost a great example of the moral teacher. Dr Ahmad Bamba was 82. Through his personal example and insightful teachings of the holy prophet traditions, he influenced hundreds of people cutting across creeds and sects.

Anyone who knows me must have heard me talk about Sheikh Dr Ahmad Bamba as my favourite great scholar in the teachings of our noble prophet traditions and a role model par excellence.

Tears were shredded and hearts were saddened that Malam is gone but none can change the situation. The loss is irreparable and a bank of knowledge is no more with us “ Inna lillahi wa inna illaihi rajiuun!’’

Sincere love for Malam goes beyond shedding tears and mere wailings and lamentations but to live according to his good path; to be good examples in knowledge and good deeds, to be moderate and tolerant in our engagements, to be leaders in piety and humility, to give the best of knowledge and expect nothing in return, to be models of patience and perseverance, to be able to talk to leaders whenever they err with wisdom and utmost empathy for the masses, to recognize and give respect to the constituted authority. Such are the characteristics of Malam and such should be the characteristics of those who love him.

Today I would like to pay tribute to one of the best Islamic scholars of our time, A man who lived a life full of dedication to the service of Almighty Allah and humanity. A celebrated father, teacher and mentor to so many in and around the world.
Ulamas that follow the ways of our beloved Prophet (peace be upon him) are his successors. In fact, it is in respect to their dignity and merit that Allah mentions them along with His Name and that of His Angels when He says: “Allah bears witness that La ilaha illa Huwa (none has the right to be worshipped but He), and the angels, and those having knowledge (also give witness); (He is always) maintaining His creation injustice.” (Qur’an, 3:18)

The Messenger of Allah (peace be upon him) said: “Verily, Allah do send His blessings to him who teaches people good. Also, the inhabitants of the heavens and the earth, even ants in their holes and fishes do ask Allah to bless him. (At-Tirmidhi)

Dr Ahmad (Qala Haddasana) as he is popularly called due to his stringent recitation of the isnād, (a list of authorities who have transmitted a report [hadith] of a statement, action, or approbation of Muhammad, of one of his Companions (Ṣaḥābah), or of a later authority (tabiʿī) its reliability determines the validity of ahadith. The isnād precedes the actual text (matn) and takes the form, “It has been related to me by A on the authority of B on the authority of C on the authority of D (usually a Companion of the Prophet) that Prophet Muhammad S.A.W said.…”

The loss of Dr Ahmad has surely created a vacuum too difficult to fill considering the imprints he has created in the refined teachings of the holy prophet’s tradition as a source for religious law and moral guidance. This has been his job for the last three decades and through it, he changed the lives of millions in a positive way as far the core understanding of the traditions of the holy prophet is concerned.

The calmness and tranquillity exhibited by the audience when Malam reads the interpretation of the prophet’s tradition give extraordinary guidance through calming of the hearts and nerves.

Sheikh Dr Ahmad Muhammad Ibrahim Bamba also known as Dr. Ahmad BUK and Qala Haddasana was born in Ghana 82 years ago. He completed his school at one of Ghana’s High Schools before he proceeded to Saudi Arabia where he studied up to doctorate level in the field of hadith ( the narrative record of the sayings or customs of Prophet Muhammad S.A.W and his companions).

After then he came back to Nigeria to teach at Bayero University in Kano. Dr. Ahmad BUK left 3 wives and was blessed with thirty(30) children and many grandchildren. Malam passed away on 7th January 2022 at Aminu Kano Teaching Hospital after suffering from a protracted illness.

Muslims in Nigeria and more specifically, in the Northern parts are faced with different problems basically ranging from sectarian hatred, creed prejudices, lust for power, intolerance and many other materialistic interests. Malam has over the decades committed his energy and drive towards addressing these drawbacks in the most strategic and diplomatic manner.

His method of teaching attracted followers from different sects and this is unconnected to the tone he used in passing the message. Malam believed that only through uniting on the path of our beloved Prophet (peace be upon him) our religious gainings could be achieved.

For over the three (3) decades he spent propagating Islam, Malam had tried to stay away from all controversial and self-destructive divisions largely caused by uncontrolled interests in theology, sociopolitical and economic matters. These issues have become the major dividing factor that has succeeded in disintegrating the unity stressed in many sections of the holy Quran.

His relationship with the government and traditional institutions during his lifetime is a clear demonstration of good followership which Islam has strongly emphasized.

Malam has in the last three decades contributed to the teaching of the prophet traditions as a source of Islamic knowledge. The hadith has a second position after the holy Quran. In these periods, Malam has read and translated the whole of Kutub al-Sittah ( the six books containing collections of hadith) and two others in his Darul Hadith Majlis.
They are:
(i)Sahih Bukhari, collected by Imam Bukhari (d. 256 AH, 870 CE), includes 7,563 ahadith
(ii)Sahih Muslim, collected by Muslim b. al-Hajjaj (d. 261 AH, 875 CE), includes 7,500 ahadith
(iii)Sunan al-Nasa’i, collected by al-Nasa’i (d. 303 AH, 915 CE), includes 5,270
(iv)Sunan Abu Dawood, collected by Abu Dawood (d. 275 AH, 888 CE), includes 5,274 ahadith
(v)Jami al-Tirmidhi, collected by al-Tirmidhi (d. 279 AH, 892 CE), includes 4,400
(vi)Sunan ibn Majah, collected by Ibn Majah (d. 273 AH, 887 CE), includes 4,341 ahadith
(vii)Al-Muwatta consists of approximately 1,720
(viii)Sunan al-Darimi It contains almost three thousand five hundred hadith (3500)
We can apparently conclude that over 39,568 traditions of our beloved prophet were read and explained in Darul Hadith in the last three decades by Malam, Subhanallah!

In a swift and emotional post, Prof. Mansur Sokoto pictured how uneasy it is to achieve this amazing breakthrough in the teachings of hadith when he posted a few hours after the death of Malam that they started reading Sahih Bukhari in 2007 (14 years ago) in his Majlis but they are still in chapter 61 after 538 lessons. Only Allah knows the number of days and hours Malam had spent in teaching his servants the series of these great books let alone the volume of reward expected Insha Allah from Allah the most gracious and the most merciful.

We pray for the almighty Allah to forgive Malam for all his shortcomings and grant him the best of places in Jannatul Firdaus.

Abdul-Majid Lawan Waziri writes from Jos, Nigeria and can be reached via: abdulmajidlawan@gmail.com