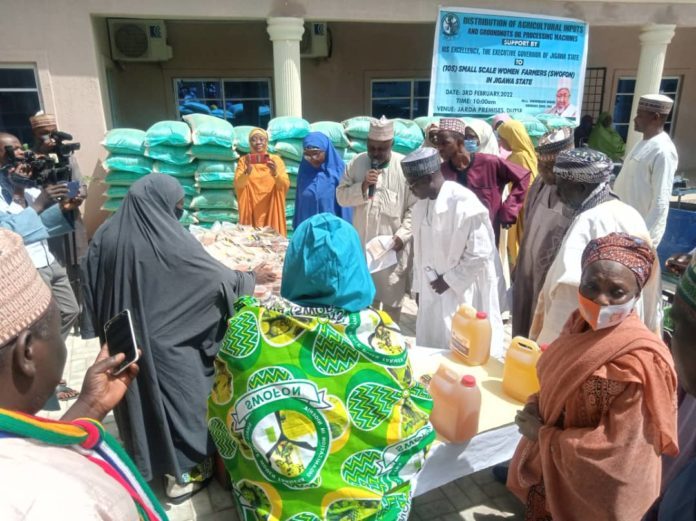 Jigawa state government has empowered 105 Smallholders Women Farmers after an investigative story by WikkiTimes has documented hardships they faced.

The story revealed how smallholder women farmers in the state struggle in vain to access government support despite a whopping N8.67bn budget for agriculture in the state’s 2019 appropriation.

WikkiTimes documented some of the challenges faced by the women farmers to include, policy deficiency, budgetary exclusions, environmental challenges associated with climate change among others.

After the story, the State government resolved to support the women with incentives such as fertilizer, seeds, and oil processing machines.

About 105 SWOFON members in the state drawn from across the 27 LGAs were selected to get the support.

Governor Badaru who was represented by the commissioner for Women Affairs, Hajjiya Yelwa Da’u Tijani distributed the bags to the selected women.

The commissioner said the gesture was in fulfilment of Governor Badaru’s all-inclusive agric business where women are also targeted for support.

Speaking during the distribution exercise, the Coordinator of the Smallholders women farmers’ association Jigawa chapter, Hajjiya Hadiza Gwiwa lauded the support of the state government.

She noted that the bags of fertilizer, farm seeds, and oil processing machines were among the major needs of rural women farmers in the state.

“Even though this may not go round for all of them, we appreciate the fact that 105 women are going to benefit from this gesture, each will go home with two bags of fertilizer, two bags of seeds, and also one oil processing machine.

“We are working on the second set, where they will also get fertilizer and some gender-friendly equipment, we are still sourcing for support, and we hope by the time it comes, the second phase of the event will be organized”, she said.

While speaking at the event, the Managing Director Jigawa state Agriculture and Rural Development (JARDA) Imam Muhammed commended the women for their contributions to agricultural development in the state.

Halima Lawal, one of the beneficiaries from Maigatari local government said; “We never saw this coming even though we have always pleaded with the government to come to our aid since after the deadly covid-19 lockdown which kept almost all of us at home. We could not access our farms and as such, we lost most of OUR farm produce to flooding, but with this support by the state government, we are going to have a rich harvest and we will farm well this time around.”