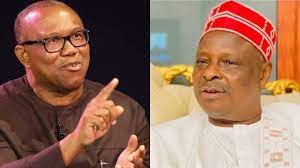 A possible merger ahead of the 2023 general elections is about to transpire between the political parties; New Nigeria’s People Party (NNPP) and the  Labour Party (LP).

“We wish to inform Nigerians that, our discussions with Peter Obi and the Labour Party are still ongoing,” NNPP announced on Twitter, Saturday morning.

NNPP revealed that both political parties have established a joint committee to discuss THE arrangements.

Speaking to BBC Hausa, Kwankwaso said “It is true we are in talks with Peter Obi and a committee is working to look into how to form a merger between us. Friends and family are being up and doing talking about the merger arrangement,” he added.

While Obi has yet to publicly announce the merger, Kwankwaso said the Labour Party and NNPP will have an advantage in the next election if a pact can be achieved.

“The merger is important because as you can see both the ruling All Progressives Congress (APC) and the opposition Peoples Democratic Party (PDP) did not pick their running mates from the Southeast, ” Kwankwaso said.