How A ‘Sold Family Wheelbarrow’ Erupted Crisis In Bauchi Community

Emmanuel Adamu, a resident of the Yelwan Kagadama community in Bauchi State was sitting out for some fresh air when some irate youths waylaid him on Thursday evening, May 26, 2022, before spreading the havoc to other residents. In a matter of minutes, the mobs had killed one person (a registered motorcyclist with Bauchi Federal Polytechnic), while more than seven others were severely injured.

Adamu was shot three times on his chest. When WikkiTimes visited him at the hospital, he was lying unconscious while his father watched over him. “My wife and I were already sleeping when we heard a knock on the door informing us that our son had been shot,” Adamu’s father said. “We were about to take him to the hospital when the police from E Division arrived and accompanied us.” 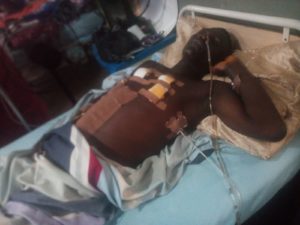 The incident snowballed into a full-blown crisis on Saturday spreading to Yelwan Tsakani and Lushi communities. This, however, prompted the state government to impose an indefinite 24 hours curfew on Yelwa community. However, it was relaxed by 12 hours on May 31, 2022. 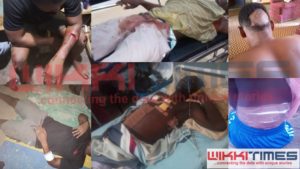 A guy from the community sold his family’s wheelbarrow to a scavenger at the rate of N2,000. “Then later, the guy wanted the wheelbarrow back,” an anonymous source told WikkiTimes, adding that the scavenger was shortchanged by the seller. “The man whom the wheelbarrow was sold to demanded for his money and the guy gave the man N1,500 instead of N2,000. That’s the genesis of the calamity.”

“Maybe the man came for a payback but the police have been informed and they are investigating the cause of the attack,” the source added.

Before the invasion, a resident of the community who just returned from the town, on a commercial motorcycle, was trying to pay off his ride. Unfortunately, he was among the first victims that were waylaid while the motorcyclist was killed. As the crises continued on May 27 and 28, more residents became victims of gunshot, as many houses were set alight.

Residents told WikkiTimes the attackers upon arrival obscured their vision. “They flashed light in our eyes and descended on us with machetes,” Emmanuel John, the son of the community head revealed, adding that victims were rushed to nearby hospitals. John also survived an injury on his head.

John added that the police did not only respond, but one of them offered to clear the bill of a victim.

Another victim simply identified as Daniel almost lost his life. “ “I would have been butchered to death,” Daniel said. “I was informed the police rushed me to the hospital when I went unconscious.”

Ahmed Moahmmed Wakil, the Bauchi State police spokesman, while confirming the incident disclosed that it emanated from a clash between two rival youth groups. According to him, the state’s commissioner of police, Umar Mamman Sanda, had ordered “a discreet investigation into the circumstances surrounding the disturbance of public peace in parts of the Yelwa area of Bauchi.”

WAEC: Agencies Must Hold Citizens In High Esteem, Responsible To Them – Osinbajo